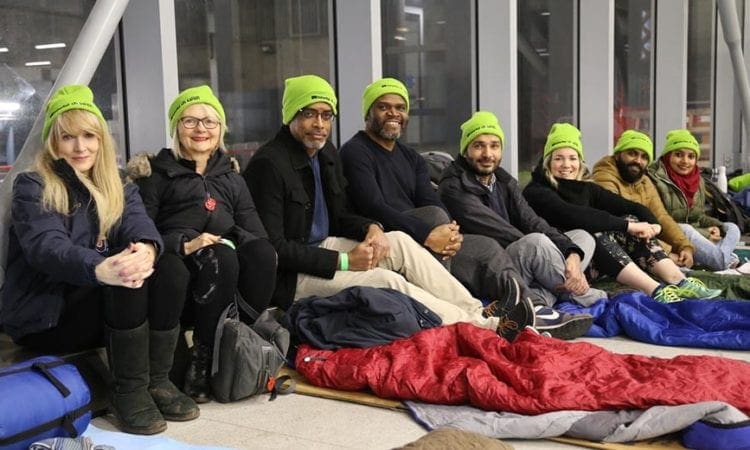 Network Rail and charity Railway Children raised over £155,000 in their second annual sleepout event in railway stations across the country this weekend.

This year’s event, sponsored by VolkerRail, was even bigger than last year’s sleepout, with nearly double the number of volunteers taking part at nine stations.

More than 300 participants from across the industry, from regional managing directors to frontline staff, took part in the event and smashed the £100k fundraising target, raising around £150k in total for Railway Children.

The money raised will help Railway Children continue their work to help the thousands of vulnerable children who pass through the railway every year.

Network Rail chair Sir Peter Hendy CBE, a supporter of the Railway Children charity, said: “We truly care about the communities we serve and the sleepout event is a great example of how the rail industry can come together to make a real difference to the lives of some of the most vulnerable people in our society.

“I’d like to give a big thank you to our station teams, volunteers and industry partners for making the event possible and  raising a massive sum, which will go towards supporting the vital work Railway Children do”.

Railway Children work alongside the BTP and the rail industry to protect and support children at risk of violence, abuse and exploitation, providing longer term one-to-one support to address the issues they face.

They also work with their families, providing parental and family support where appropriate to improve relationships and reduce conflict. Both of these methods are effective in achieving long-lasting, positive outcomes.

This year the British Transport Police estimates it will deal with more than 10,000 child safeguarding incidents on Britain’s railways; an 11% increase from 2018/19.

Almost 30% of children identified as being at risk will have run away from home or care; other issues include sexual or criminal exploitation, abuse, addiction, poor mental health and suicide.

Railway Children CEO Terina Keene said: “Our work at railways in the UK has shown us that all too often these vulnerable children see stations as a place to go or hide, and trains as a means to escape.

“This event has helped us raise awareness of the problems young people face as well as vital funds to support them and to keep them safe. We couldn’t have done it without the support of everyone involved and we have to say a huge thank you to everyone who gave up their beds for the night to join us for the Sleepout.”

Steve Cocliff, managing director of VolkerRail, said: “VolkerRail is proud to yet again take part in and sponsor the annual Railway Children sleep out.

“More than three hundred employees from across our industry have volunteered to spend a night out in a railway station to raise money and support the fantastic work the Railway Children charity does in helping those in need both here in the UK and abroad”.

Network Rail encourages and enables staff to get involved in charitable causes, with employees entitled to five annual volunteer days and a payroll giving scheme.

Last year, Network Rail staff volunteered 50,000 hours to community projects across Britain and raised an average of £45,000 a month for charitable causes through the company’s payroll giving scheme.