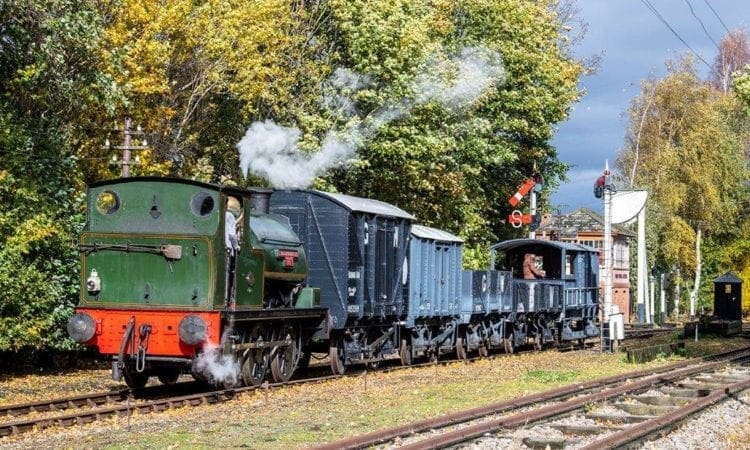 The new Didcot Railway Centre season opens this weekend (February 15-16) with the ‘Delivering The Goods’ steam and diesel gala event.

Demonstration freight trains and wagon movements will recall the days when goods traffic was more important to the railways than passengers.

One of the stars of the show will be 1913-built Hudswell Clarke 0-6-0ST Sir Robert McAlpine & Sons No. 31, making its first working visit away from the late Sir William McAlpine’s private Fawley Hill Railway, courtesy of Lady Judy McAlpine.

The event will provide a rare chance to ride in a passenger carriage behind No.31, which spent most of its working life shunting trucks loaded with construction materials, with passengers at Fawley Hill carried in an adapted goods wagon.

At Didcot, No. 31 will be reacquainted with the goods wagons and trucks that played an important part in its history as its propels wagons loaded with coal up the steep incline to the centre’s coal stage, the sole surviving working example of a type of building that was once commonplace at locomotive sheds.

No. 31 will also be used to work demonstration goods trains on one of the centre’s two running lines. It will be in action alongside resident GWR prairie 2-6-2T No. 4144, which will head a mixed train of passenger carriages and goods wagons.

The pair will be joined by two diesels – Class 08 No. 08604, which will shunt wagons, and Class 14 D9516, which will work demonstration goods trains and several passenger trains.

Visitors will also be able to see a working model layout of a goods yard that featured in the grand final of Channel 5’s Great Model Railway Challenge and represents a goods yard set between 1947 and 1954. The layout, William Street Yard, was built by a group of volunteers who work at both Didcot and Fawley Hill, and many of the vehicles in action are models of those at Didcot.

Acres of sights to see!

There’s also plenty more to see and do at the 21-acre living museum in Oxfordshire, which depicts almost two centuries of railway history. Visitors can stroll through the original 1932 engine shed and see magnificent preserved locomotives – they can even climb onto the footplates of some.

There’s surviving track from Brunel’s broad gauge railway, painstakingly restored buildings, coaches and wagons, as well as exhibits and interpretation to tell the story of the development of railways and how they changed everyday lives.