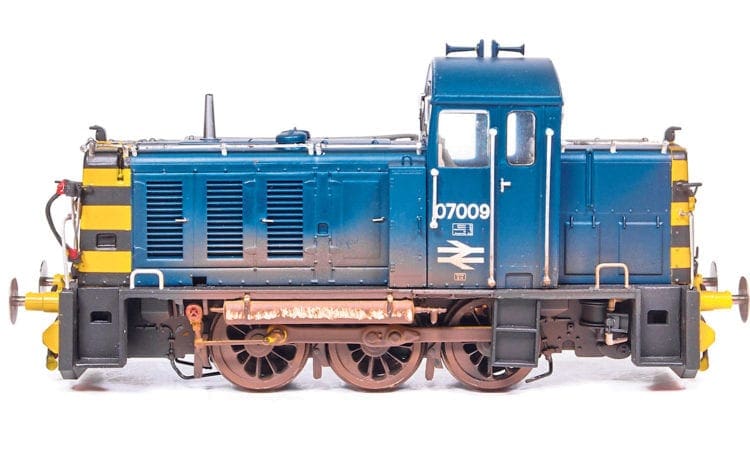 The second release of Heljan’s model of the 14 Ruston & Hornsby 275hp Class 07 0-6-0 Southampton dock shunters has arrived in the shops. Built with a short wheelbase to negotiate the tortuously curved track of the Southampton Docks complex, and centre cabs with good visibility for shunting duties, they worked in the area for the bulk of their service lives.

Numbered D2985-D2998, they were introduced in 1962, finished in BR (SR) Lancing coaching stock green with yellow and black stripes on the bonnet ends.

BR blue livery was applied in the late 1960s, and renumbering in the TOPS system to 07001-014, from around 1973. The underlying livery applied to the Version 2 weathered model of No. 07009 is BR blue with TOPS numbering.

The model features the air-brake equipment fitted to several members of the class in the late 1960s, a required fitting as modern air-braked freight wagons became more common. Waist- height air hoses duplicating those on the buffer beam allowed the dual-braked locomotives to shunt SR multiple unit stock around Eastleigh.

Following reallocation to Eastleigh depot, the class was used to cover shunting duties in the immediate yard and works, and apart from a brief flirtation with EMU shunting at Bournemouth, the locomotives remained in the Eastleigh area until they were withdrawn after a short 15-year career.

Heljan announced an OO-gauge model of the Class 07 in January 2016, and these arrived in a variety of liveries last year as its Version 1 release. The second batch of this very popular model has now arrived, with the same high level of specification including a body and cab assembly made up of several well-moulded sections, neatly applied flush glazing and an array of small fittings for braking equipment, cab interior and buffer beam detail. The models have subtly illuminated marker lights and a six-pin DCC socket for simple decoder installation too.

The blending of rust and grime colours, together with a matt finish, has created a nicely weathered model of the Class 07. This was the condition in which the full-sized shunters, particularly in their later service history, will be most commonly remembered. The BR blue livery is well applied, with sharp yellow and black stripes to the ends and white to pipework and long tanks fitted to the underside of the solebar.

Application of the grime below the solebar is consistent over all of the details along with the wheels, and the weathering has a good rust shade to it – a nice dark brown suggesting years of brake residue build-up from frequent hard braking. It is not a blanket coat of dirt either – streaking of the rust colour is apparent on the long underframe tanks.

Grime is present above the solebar too, with concentrations of an oily grey colour at the bottom of the bonnet doors and less so over the rest of the body, taking the shine off the BR blue livery. The same grey grime with a touch of rust is also present on the bonnet fronts and around the long bonnet grille.

Overall, the model is well weathered with convincing colours, and looks the part when compared with published photographs. Along with its good shape, smooth-running chassis and fine detail, the weathered Class 07 from Heljan is an attractive model for those nervous of tackling a weathering project.

The Newcomer’s Guide to Model Railways

In this comprehensive guide to railway modelling, long-time modeller Brian Lambert provides newcomers — as well as established modellers who may want to enhance their skills — with a single-volume source of information on all aspects of the hobby, from the basics of baseboards to the intricacies of modern Digital Command Control.  Get your copy today and start modelling.