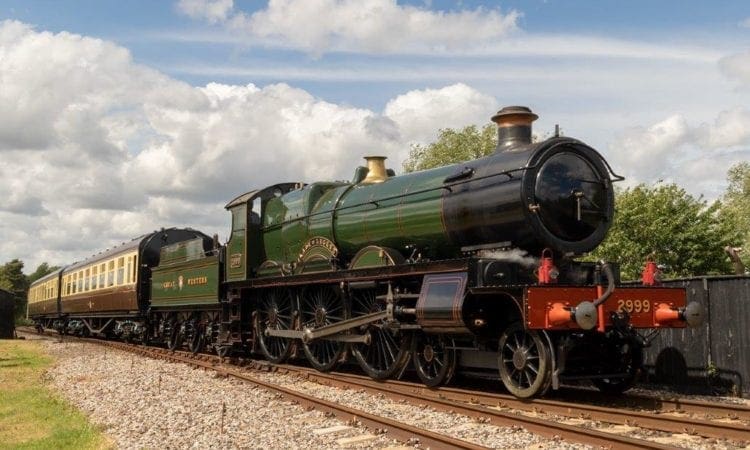 The Severn Valley Railway has announced the debut appearance of GWR Saint class No. 2999 Lady of Legend at its season-opening Spring Steam Gala.

The Severn Valley Railway will be the first heritage railway to welcome the much-anticipated ‘new-re-build’ locomotive following its completion last year at Didcot Railway Centre. The 4-6-0 is also the first confirmed gala visitor and is set to be in action during the extended four-day event from April 16-19.

Dubbed the ‘78th Saint’, Lady of Legend is the first new example of George Jackson Churchward’s Edwardian Saint class to be built since 1913.

Seventeen years on, a project was launched by the Great Western Society to re-create a ‘Saint’. As none were saved for preservation, No. 4942 Maindy Hall was purchased to be used as a base for one.  Last year, No. 2999 Lady of Legend was completed.

This year marking the 50th anniversary of the Severn Valley Railway’s official opening in preservation.

Severn Valley Railway Gala chairman Brian Malyon, said: “We are absolutely thrilled to be bringing Lady of Legend to the Severn Valley Railway and are sure that it will really draw the crowds, just as ‘new’ locomotive Tornado has done during its very popular visits to the Railway.

“It is a very fitting gala visitor during the Severn Valley Railway’s 50th year in preservation, reflecting a celebration of our past heritage as well as the skills, dedication and technologies of today which are helping us to look firmly to the future.”

The Severn Valley Railway’s Spring Steam Gala will run for four days this year in its new April slot, and will feature up to four visiting locomotives in action alongside its homefleet. An intensive timetable including double-headed full-line services, goods trains and local services will be in operation, with services running into the evenings on the Friday and Saturday. Some more surprises are planned, to be announced shortly.