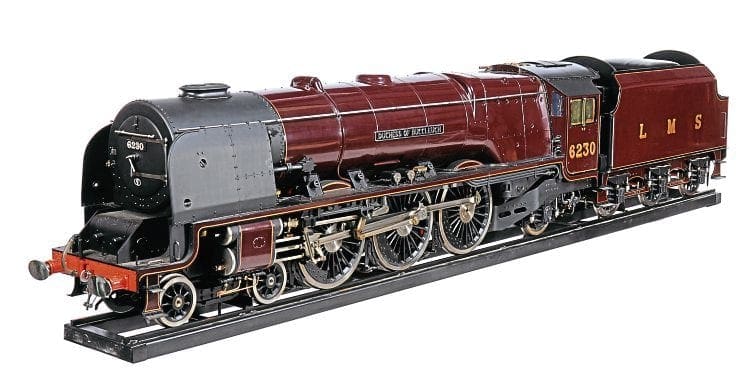 A model of an LMS Princess Coronation Pacific described as “one of the best railway models ever built” will be going under the hammer at auction on March 12, with an estimate of up to £150,000.

It is a 7¼in gauge live steam No. 6230 Duchess of Buccleuch, one of two built by the late Harry Powell of Crewe, a multi-gold medal winner who is widely regarded as a model maker without parallel. He constructed just two of these models, the other of which sold at auction in April 2012 for £140,000.

The first model was sold by auction house Dreweatts, and the same company will be selling this second model, which is 9ft 5in long and took 18,000 hours to build over 10 years, using original drawings.

Michael Matthews, Dreweatts’ auctioneer and steam model engineering consultant, said: “It is as near as it is possible to get to the real thing – absolutely stunning and one of the best railway models ever built. Harry Powell won gold medals with every model he ever entered in exhibitions.”

Powell was no stranger to Princess Coronations, for he was a master coppersmith and chief of the copper shop at Crewe Works, where he spent his entire railway career and where No. 6230 was built in June 1938. It was a Glasgow Polmadie (66A) engine throughout its BR days, and as such was one of the members of the class so elusive to southern-based trainspotters.

Read more and view more images in Issue 250 of HR – on sale now!