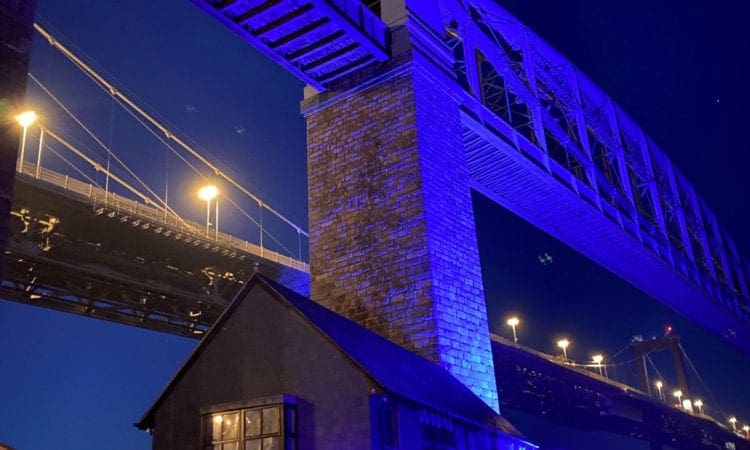 Some of the best known railway landmarks across the UK were lit up in blue to show support for NHS and key workers during the coronavirus pandemic.

The historic Royal Albert Bridge which spans between Plymouth, Devon, and Saltash, Cornwall, was lit up in blue as a show of support to the NHS.

The Brunel designed railway bridge over the river Tamar was lit up from 8pm to coincide with the national show of appreciation for everyone who works for the NHS as the country battles coronavirus.

The bridge, which carries the only railway line connecting the south west with the rest of the country, was lit up from both the Devon and Cornish side of the bridge.

The lighting of the Royal Albert Bridge, which first opened in 1859, was possible following collaborative working between Network Rail, Ashtorre Rock, a community centre located almost immediately under the Cornish Tower and Plymouth City Council.

Glasgow Central Station lit-up blue to show solidarity with key workers and front-line NHS staff all across the country.

Scotland’s busiest station joined with other famous attractions like Glasgow’s SSE Hydro and Falkirk’s Kelpies in lighting up in NHS colours to salute the dedication and efforts of healthcare workers in the battle against the coronavirus. Read about the work Network Rail are doing here.

The illumination of the 21-arch viaduct, which stars in the Harry Potter series of films, was organised by Martin Whyte of events company The Stage Group and echoes wider similar activities undertaken by the entertainment industry in this unprecedented state of enforced inaction.

Have you seen other railway landmarks lit up to show their appreciation for key workers? Then get in touch!