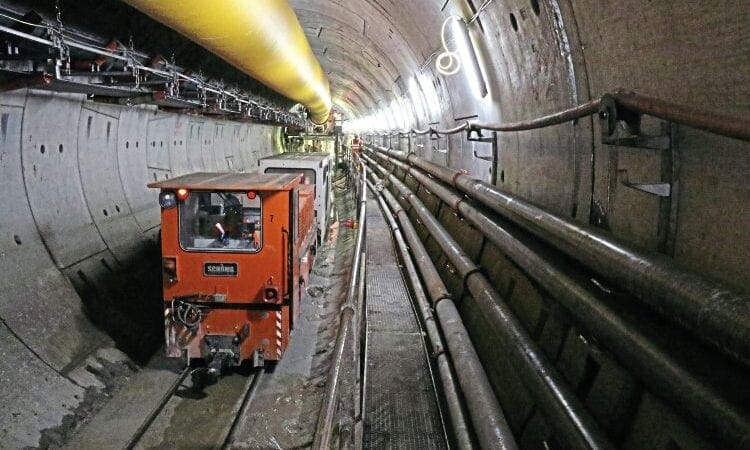 MAJOR tunnelling projects are normally accompanied by construction railways using locos designed for mining and tunnelling – by their nature these railways are temporary and rarely documented in the railway press.

Thanks to a visit to see construction work on the new Northern Line Extension (NLE) in south London, The Railway Magazine can tell the story of one short-lived, 750mm-gauge railway under Battersea and Kennington that began operation in 2017. By the middle of 2018 it will no longer exist… although another new one will be in operation nearby.

The 3km, £1billion extension of the Northern Line from Kennington to a new terminus at Battersea Power Station is designed to serve one of the biggest regeneration projects in London, with more than 20,000 new homes, new offices, and the imposing new American Embassy being built in the area – part of which was once home to the LSWR’s Nine Elms shed.

The new Underground line, which is being partly paid for by the developers building the new homes and offices, is due to open in late-2020. Two new Zone 1
stations will be added to the Northern Line – Battersea Power Station and Nine Elms.

Both new tunnels join the Northern Line just south of Kennington station, with separate junctions for both being off the Kennington empty stock loop line, sections of which will become part of the new Battersea branch.

The middle part of the empty stock line will remain for use if trains need to be turned at Kennington, although once the new branch to Battersea is available the plan is that trains which terminated at Kennington will continue there.

The two new tunnels vary in length: the northbound one is 2.4km, while the southbound one (which passes five metres under Oval station on the Morden branch of the Northern Line) is 2.6km.

The TBMs can only work with the aid of the 750mm-gauge railway as it brings in the concrete segments used to line the tunnel wall, materials such as grout, new track as the tunnel gets longer, and the line also provides transport for the workforce to and from the TBM.

The walk was initially a short one, but by the end of the project it will be a 2km one.

The Battersea work site is the base for all the tunnelling. The TBMs were assembled in the bottom of a large shaft and after they had started their drives it became the base for the 750mm gauge railway.

All of the materials required are lowered to the bottom of the shaft by tower cranes after arriving on site by road, the tunnel segments coming from Kent.

On completion, the work site will become the crossover cavern immediately north of the new Battersea Park station when the line opens, while the area above it will be completely covered by new development.

The spoil excavated by the TBM is moved by conveyor all the way back to Battersea and then onto barges on the Thames for transport to a land reclamation project in Essex. The TBMs are supplied with electric power using heavy duty cables.

Rather than having to connect new ones every few hundred metres, a cable the length of the tunnel was made, which sits on a drum, and moves unroll as the TBM moves forward.

As the TBMs have now finished their work, their
300-tonne cutter shields will be dismantled in early 2018 and brought to the surface in pieces via the Kennington shafts.

The rest of both 100m-long TBMs will be moved backwards to the work site in Battersea and dismantled. The 750mm gauge railway will be dismantled and the locos and wagons lifted back to the surface using cranes.

There are six locos in use on the NLE project, all were built by German specialist Schöma, in Diepholz, near Bremen, which is the world’s market leader in tunnelling locos. Schöma has been in business since 1930, originally supplying gravel and peat railways, but moved into construction railways in the 1970s.

The company patented the cardan shaft drive mechanism used in all its locos and many others since, such as the BR Class 91.

Schöma has built nearly 7,000 locos in its history and major British projects have used them (more than 100 were used to build the Channel Tunnel, 25 used to build CTRL/HS1 in 2002/03, and many were used recently in constructing the Crossrail tunnels).

The locos used for the NLE project were brand new, despite the project being relatively small and short compared to Crossrail. Contractors often use new locos where timescales are tight and the cost of delay is significant as it is much cheaper to buy a fleet of new tunnel locos than pay developers compensation for delayed projects.

However, locos used for short projects like the NLE are often moved by their owners to other projects or sold on to new owners for use elsewhere on bigger projects so one loco not working won’t delay the whole project.

The FLO consortium is also building the £746million central section of the new 7.2m-diameter Thames Tideway super sewer project – this also involves a TBM, and the construction site is also in Battersea. The company told The Railway Magazine that it was possible, but not yet decided, that some or all of the loco fleet will move to the nearby Tideway project.

The NLE loco fleet were all the same Schöma CHL-60-G two-axle diesel hydraulic 75kW model, which is 16.5 tonnes.

The locos were given running numbers based on the last number of their builder serial number – so there was no number 1.

The railway has a wagon fleet of around 19 vehicles. These consist of a mixture of flat skeleton wagons to transport concrete tunnel lining segments, concrete carrying wagons,
others fitted with industrial storage tanks for grout, and enclosed passenger vehicles known as ‘manriders’.

All the trains operate as push-pull with the loco on the southern (Battersea) end – this enabled them to push wagons loaded with tunnel segments right under the TBM, where the segments were lifted by the TBM’s hoist onto the transporter system, which put them into position on the
tunnel wall.

Each train had a video camera fitted on the rear wagon so the loco driver could see where it is when reversing. The maximum speed of operation is 15kph.

The 750mm gauge track was laid as short panels as the tunnel progressed so it is not always entirely straight – in some places there were very noticeable kinks in the alignment.

Tunnelling using the TBMs was completed on November 8, 2017, but some manual tunnelling work will be required in early 2018 to complete the project; in particular the three emergency cross passages between the two running tunnels and some additional passages at Kennington station.

The main task remaining is to fit out the tunnels with a concrete base on which to lay the railway.

Unlike the older parts of the Northern Line the new tunnels will also feature a one-metre-wide emergency/maintenance walkway along their entire length. For the new Nine Elms station the builders will dig down from the surface to reach the new tunnels and then break into them to build the new station platforms.

One of the most ingenious parts of the whole project is how the two new single-track tunnels connect to the Kennington empty stock loop line. To achieve this the construction engineers sunk shafts down to the loop line from the ground above in both Kennington Green and Kennington Park, and then excavated new bigger tunnels around the empty stock loop tunnel.

When the new bigger diameter tunnels were complete and lined the old cast iron tube tunnel in the middle of the new one was removed during three weekend possessions between September and November 2017.

For the southbound junction at Kennington Park, 106 rings of the old tunnel were removed and a slightly longer 120-ring section was dismantled at the Kennington Green junction site.

The actual junctions from the empty stock line with the two new lines were then created in further possessions at Christmas 2017. Once the new running tunnels have been completed with trackbed and track they will be connected to the existing line. ■

Read more News and Features at https://www.therailwayhub.co.uk/ and also in the latest issue of The Railway Magazine – on sale now!