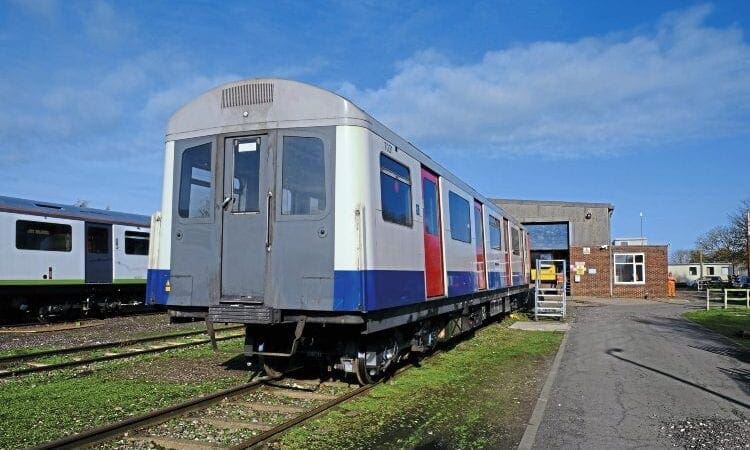 Ben Jones visits Long Marston to find out how redundant District Line trains are being rebuilt to provide cheaper and greener alternatives to brand new multiple units – and how Vivarail is looking to the future with new methods of propulsion.

Then suddenly – silently – it sets off, accelerating quickly and cantering around the test track with no more than a distant electrical whine. No, it’s not a runaway, but Vivarail’s battery powered D-Train demonstrator – one of several options the company is now developing to power its upcycled trains.

Inside, a bank of batteries obtained from the Bombardier/Network Rail Independently Powered Electric Multiple Unit (IPEMU) project provides power for the traction motors and enough charge for up to 80 hours of operation.

It’s unlikely this could be replicated in the harsher realities of main line operation, but computer simulations predict it would be sufficient for a full-day diagram on a branch line such as Maidenhead to Marlow.

The modular design of the company’s traction packages is encouraging it to investigate various methods of propulsion, from diesel-electric ‘gensets’ to DC or AC electric, hybrids and, in the longer term, hydrogen fuel cells.

The single-car battery prototype was developed in just four months, between January and April 2017, in response to the changing demands of train operators. The first production battery train is close to completion and should start its main line trials in April.

Since Vivarail’s inception around five years ago, the UK rail market has changed rapidly. The trains were initially envisaged as a way of re-using spare D Stock sets to solve a looming shortage of DMUs, and replace the Class 142-144 ‘Pacer’ railbuses, but are now being offered as a potential ‘green’ alternative to conventional diesel units for urban and low-density rural routes.

The project is being led by former Chiltern Railways chairman Adrian Shooter and former Wrexham & Shropshire Railway MD Andy Hamilton, plus financial backing from Railroad Development Corporation (RRDC) in the USA, with Vivarail having acquired 228 vehicles from LUL – enough for around 70-75 ‘D Trains’.

The vehicles have corrosion-free aluminium bodies and relatively new FLEX100 bogies, fitted during a refurbishment programme less than 10 years ago, and are seen as an ideal basis for ‘upcycling’ to create new main line trains.

Central to the concept is a highly modular underframe arrangement, allowing engine, battery or generator packs to be exchanged very quickly using a forklift truck – largely eliminating the need for depot visits.

Vivarail claims that engine changes can be completed in just 10 minutes and ‘D Trains’ will only require inspections over a pit road every nine months.

Most maintenance is possible at the trackside, meaning empty mileage to and from depot can be reduced, cutting operating and fuel costs.

Purchase price is thought to be around two-thirds that of a comparable new vehicle, although purchase and leasing costs of new trains have dropped over the last few years, while fuel consumption is also around a third less than a conventional DMU.

Conversion includes stripping the bodyshell back to bare metal, the addition of strengthening sections in the cab to meet main line requirements, a complete rewire, and extensive modification of the underframe to accommodate the new equipment. Modifications have also been made to the solebar to ensure the cars comply with Network Rail’s gauging requirements.

In theory, a ‘D-Train’ can run anywhere a former BR Class 15x ‘Sprinter’ can go – which is almost anywhere on the network.

Internally, rebuilt cabs, new LED lighting, door controls with selective door opening (SDO), and passenger information systems are fitted, along with new and/or refurbished seating in a variety of arrangements suited to metro, regional or rural operation, according to customer choice. A fully accessible toilet can also be fitted if required.

The wide, single-piece sliding doors, wide vestibules and flat floors help to make the trains compliant with the new PRM-TSI accessibility regulations, which come into force in 2020.

Sporadic main line testing has been underway since late-2016 with prototype set No. 230001, and will restart in early-2018 on the Cotswold Line.

Plans for a passenger trial with London Midland on the Coventry to Nuneaton line were scuppered by a widely publicised fire in December 2016, which damaged one of the train’s driving cars.

The cause of the fire was traced to a fuel leak in one of the power packs, and to the positioning of the fuel cut-off device on the opposite side of the engine to the fuel inlet.

The power packs have been redesigned, based on the conclusions of Vivarail’s investigation, and two fire protection systems are now fitted, allowing trains to continue running on one engine and limiting damage to one power pack.

Testing with No. 230001 has also allowed the company to modify and improve the design for its production trains. DC traction motors have been replaced by AC equipment and a new design of genset produced by Strukton, in the Netherlands, has been introduced on set No. 230002.

This first production train features the so-called ‘City’ interior with Underground-style longitudinal seating, but will also, for the first time, feature new gangways between cars.

Various other design and production improvements have been identified, including the in-house assembly of diesel power packs. In December 2017, Vivarail announced it is opening a new production facility in Seaham, County Durham, a location chosen to take advantage of the region’s highly-skilled labour pool and engineering base. Up to £100,000 will be invested in the 11,000sq ft production site.

Three different types of powerpack will be assembled at the new plant, including diesel gensets and a pioneering battery-only system currently being developed with £640,000 grant funding awarded in 2017 by Innovate UK.

The site could also be expanded to refurbish other components, such as the bogies, if demand grows as hoped. Up to 30 jobs could eventually be created in Seaham, in addition to the 50 people already employed by the company.

Since the concept was first revealed in 2014, Vivarail has reported keen interest from train operators and leasing companies, but received no firm orders until December 2017, when Abellio confirmed its intention to take three two-car sets from this December for London Northwestern’s Bedford to Bletchley route.

However, political and public reaction has been mixed, with strong criticism, particularly in northern England, from some commentators hostile to more ‘hand-me-downs’ from London, and others questioning the suitability of the 60mph trains for the longer-distance regional services operating across the north.

Vivarail’s hopes of providing ‘Pacer’ replacements to the new Northern franchise were dashed in December 2015 when Arriva elected to buy new DMUs from CAF in Spain.

The builder says for 95% of the routes it has modelled for ‘D-Train’ operation, the faster acceleration and shorter station stops possible with the train compensates for its lower top speed. It also argues many regional and local trains rarely manage 60mph between stops with the current trains.

Elsewhere, there has been some interest in the trains for rural lines in south-west England and from the promoters of reopening schemes keen to keep costs as low as possible. Vivarail says it is talking to various potential customers, but will not reveal their identity until contracts are signed.

This year is likely to be a key one for the ‘D-Train’, with several potential customers being lined up, including the new Wales & Borders franchise.

With the electrification of the Cardiff to Swansea main line shelved by the Government and the Cardiff Valleys scheme uncertain, battery-powered or hybrid ‘D-Trains’ have been suggested as a potential replacement for Class 142/143 ‘Pacers’, and as a stopgap for other DMUs that won’t be modified before the 2020 Persons of Restricted Mobility (PRM-TSI) rules come into force.

Once firm orders have been received, Vivarail says it will be able to complete up to two or three trains each month at its Long Marston base.

A production plan is in place through to the end of 2019, aimed at providing vehicles to meet the looming PRM-TSI deadline. Should the concept take off, Vivarail says it will be in the market for more suitable vehicles to convert and, in the longer term, it could look at building all-new vehicles using the technology pioneered on No. 230001.

With conventional electrification falling rapidly out of favour and the Department for Transport (DfT) encouraging operators to look at cleaner sources of energy for self-propelled trains, attention has switched to battery and hydrogen technology.

Vivarail is working with BOC, Ballard and AirTech to develop hydrogen fuel cells suitable for the ‘D-Train’, but is also considering numerous ways to make battery-powered EMUs a reality, including recharging from banks of recycled car batteries at strategic points, such as branch termini.

In the short-term, diesel-battery hybrids are likely to offer a ‘belt-and-braces’ compromise, especially in a conservative railway market, where no-one wants to be the first to adopt unproven technology.

While Porterbrook has secured orders from Northern and Arriva Trains Wales for its bi-mode Class 319 ‘Flex’ electro-diesel multiple units (EDMUs), Vivarail is looking at different markets for its trains, providing new, lower-cost options for both urban and rural transport in the coming years. ■

Read more News and Features at https://www.therailwayhub.co.uk/ and also in the latest issue of The Railway Magazine – on sale now!