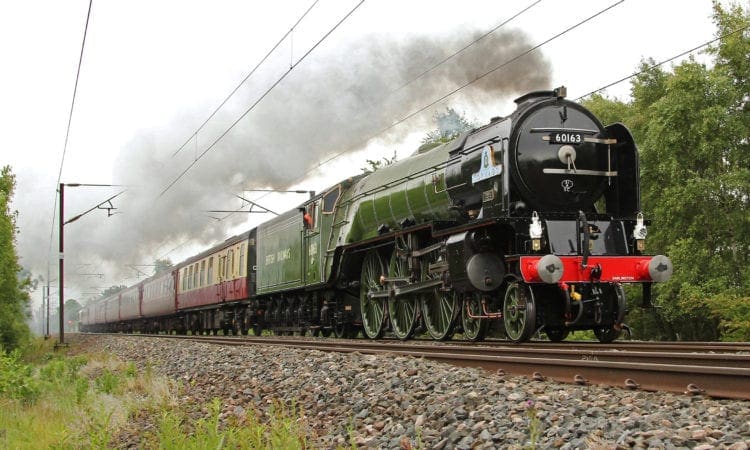 Tornado has announced that their North Briton trip planned for August will now run on the 28th September 2019, due to maintenance requirements.

In consultation with our operator, please note that our North Briton trip planned for 17th August 2019 will now run on 28th September 2019. This is due to operational and maintenance requirements. pic.twitter.com/ZUwbfbgtx4

“In consultation with our operator, please note that our North Briton trip planned for 17th August 2019 will now run on 28th September 2019. This is due to operational and maintenance requirements.”

The news comes after Tornado Railtours announced that ‘The North Briton’ event, due to take place on Saturday 9th February via Settle & Carlisle Railway had to be postponed due to “some damage to a motion bush”.

Tornado Railtours made the announcement on their social media pages. It read:

“It is with considerable regret that we have to announce that the ‘The North Briton’ on Saturday 9th February from the East Midlands to Carlisle via the Settle & Carlisle Railway has had to be postponed and re-dated to September 2019 – we are hoping to have confirmation of the precise date within a few days,” the page said.

“Following its test run earlier this month it was identified that No. 60163 Tornado had suffered some damage to a motion bush as a result of a minor deflection to the combination lever on the driver’s side.

“During the test run, Trust personnel had noticed that Tornado was slightly off-beat – something impossible to detect until the locomotive had left the 25mph Nene Valley Railway and picked up speed on the Network Rail main line. Investigations to-date lead us to believe that this damage was caused during a priming (water carry over) incident whilst operating a photo charter train on the Nene Valley Railway during our last couple of weeks of operations.

It is with considerable regret that we have to announce that the ‘The North Briton’ on Saturday 9th February has had to be postponed & re-dated to September 2019 – we are hoping to have confirmation of the precise date within a few days. Full story here t.co/tPpnQCey29 pic.twitter.com/abdIhXr45m

“It was, however, not possible to identify the cause of the damage to the motion bush without significant dismantling of the engine. After work to rectify this issue, and a thorough C exam including a piston and valve inspection, the engine has been reassembled and Tornado is currently in the middle of her annual recertification prior to returning to the main line.”

Despite the best efforts by the Director of Engineering and his team of staff and contractors, the company have been advised by DB Cargo that they now have insufficient time to complete the necessary processes and procedures to facilitate the necessary test run to enable Tornado to haul ‘The North Briton’ on Saturday 9th February.

The statement apologises to those who wanted to attend and who support the locomotive.

“We recognise this will also be a great disappointment for all those who support the locomotive and we seek your further patience and support whilst we clear the remaining hurdles to Tornado’s imminent return to main line service.”

The Tornado will be running a further ‘The North Briton’ from the East Midlands and South Yorkshire in September 2019, but are waiting for an exact date to be confirmed.

If you are booked on this tour, UK Railtours will be in contact when the date is confirmed.