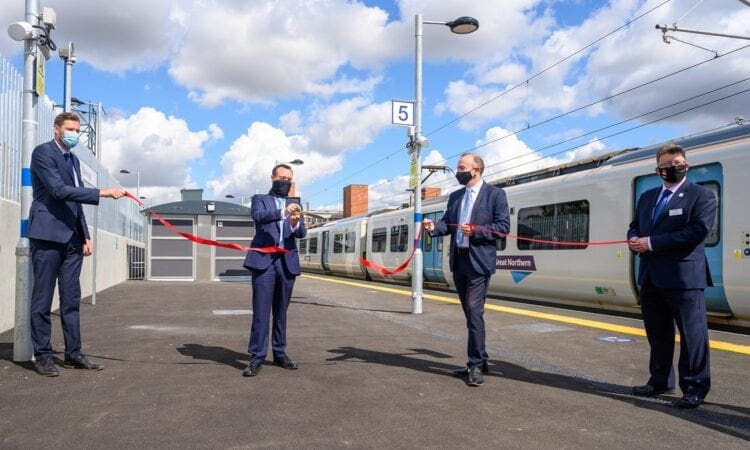 Rail Minister Chris Heaton-Harris has announced the opening of a new £40 million platform and track at Stevenage station.

Construction work on the project has been accelerated and delivered more than a year ahead of the revised schedule.

Rail passengers will benefit from more frequent and reliable services as well as better long-distance connections.

The new platform 5 was officially opened this week to the first weekday services, where Mr Heaton-Harris hailed the completion of the project as an important milestone in the wider £1.2 billion upgrade of the East Coast Main Line between London and Edinburgh.

Work began in early 2019 to build a dedicated fifth platform where Govia Thameslink Railway (GTR)’s Great Northern trains from the Hertford North line, known as the Hertford Loop, could terminate and then go back towards London creating space on the existing tracks for Thameslink trains and restoring the train service between Stevenage and the Hertford Loop served by buses since May 2019.

With the new platform and track separating the local Hertford Loop services from the longer distance mainline Great Northern, Thameslink and London North Eastern Railway trains, there will be better reliability.

The restored train service running between Stevenage’s new platform and the Hertford Loop will be an improved all-day, twice-hourly service between Stevenage and Hertford North, giving passengers from the loop better connections with the fast mainline services which stop at Stevenage.

Network Rail worked with GTR to accelerate the revised project which has been delivered over 12 months earlier than planned. The new platform includes a passenger lift and stairs to an extended station footbridge along with 2 waiting rooms, 3 sets of seating, a help point and ticket machine.

Rail Minister Chris Heaton-Harris said: “Our ambition is not just to deliver more punctual journeys, but to deliver major projects punctually as well.

“This new platform and track at Stevenage will mean more frequent and reliable services for passengers who use the line day in day out.

“Thanks to the hard work of Network Rail and GTR who have worked tirelessly to accelerate the project, we have reached an important milestone in our ambitious £1.2 billion East Coast upgrade, which will bring improved connections, faster journeys, thousands of extra seats per day and more choice for passengers.”

Paul Rutter, Network Rail Route Director, said: “This vital project to build a bay platform at Stevenage is part of a programme of investment that will allow additional services to run on the East Coast Main Line, bringing more choice, more seats and a more reliable railway for passengers.

“It will also bring more resilient local services on the Hertford Loop, as trains will soon be able to terminate at Stevenage and then go back towards London.

“We would like to thank passengers who have needed to use bus replacement services between Stevenage and Watton-at-Stone, station users and people who live near the railway for their continued patience whilst this essential part of the East Coast upgrade was completed.”

Steve White, GTR Chief Operating Officer, said: “The most recent independent customer satisfaction survey showed Great Northern as the most improved operator. This is more good news for our customers.

“We have worked closely with Network Rail on this important project as part of the continuing transformation of our railway. This new, additional, platform will help us run services more punctually on both the Great Northern metro and mainline services.

“The new platform also means that we can start running our Hertford services to and from Stevenage again giving our customers from that area fast, convenient, step-free connections at the station to Cambridge, London, Gatwick and Brighton.”

The government’s £1.2 billion investment in the East Coast upgrade between 2014 and 2024 will improve passenger journeys, create capacity for up to 10,000 extra seats a day on long-distance services, speed up journeys and improve reliability for passengers.

Major work is also taking place at King’s Cross and near Peterborough, where a new section of railway is being built at Werrington so trains, particularly freight, can get to and from the line to Spalding, freeing up space on the East Coast Main Line for extra passenger services.

Conventional signalling will be replaced with a digital system that allows trains to talk to the track allowing the smooth the flow of trains, making journeys safer and reduce signal failures that every year result in thousands of hours of delays.