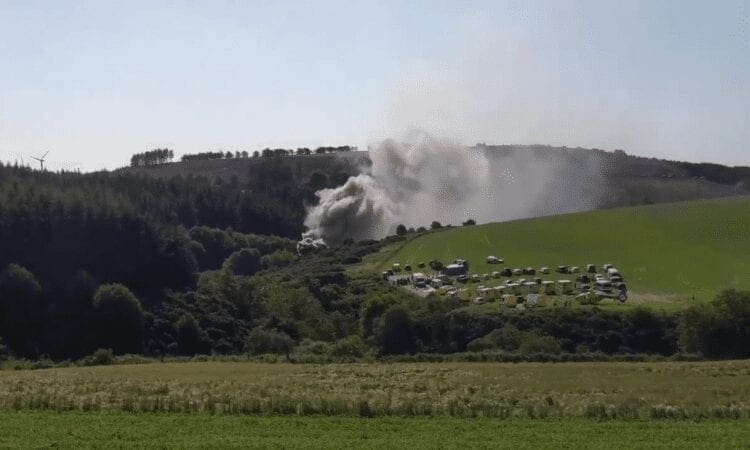 Three people are believed to have died and more seriously injured after a passenger train derailed near Stonehaven in Aberdeenshire, Scotland.

Around 30 emergency vehicles, including an air ambulance, are at the scene and a major incident has been declared.

The incident – involving the 06:38 ScotRail service from Aberdeen to Glasgow Queen Street – took place at about 09:40 at Carmont, near Stonehaven.

British Transport Police (BTP) were called to the line in Stonehaven, Aberdeenshire at 09.43am this morning (12 August) following a report that a train travelling from Aberdeen to Glasgow Queen Street had derailed.

“Officers remain on scene this afternoon alongside the ambulance service, fire brigade and colleagues from Police Scotland.

“Very sadly despite the best efforts of paramedics, we can confirm that three people have been pronounced dead at the scene.

“While formal identification is yet to take place, the driver of the train is very sadly believed to have died. His family have been informed and are being supported by specially trained family liaison officers.

“Officers are continuing to work to inform the families of the other two people who sadly died.

“Six people have been taken to hospital to be treated for injuries, which thankfully are not believed to be serious.”

Chief Superintendent Eddie Wylie said: “This is a tragic incident and first and foremost our thoughts are with the families and friends of those who have very sadly died this morning.

“We remain on scene alongside our emergency service colleagues, and a major incident operation has been underway. I would like to reassure the public that this was not a busy service, and from CCTV enquiries and witness statements we believe all passengers have been accounted for. However, once the area has been made safe then a full and thorough search will be conducted, which is likely to take some time.

“I know many people will understandably have questions, and we will be working closely alongside the Rail Accident Investigation Branch and the Office of Rail and Road to establish the full circumstances of how the train came to derail.”

First Minister Nicola Sturgeon said it was an “extremely serious incident” and there were reports of serious injuries.

Ms Sturgeon said the derailment had happened in “a very difficult location for emergency services to access”.

“I know and appreciate that there will be many families who will be anxious if they believe they had relatives who were on that train.

Prime Minister Boris Johnson said: “I am saddened to learn of the very serious incident in Aberdeenshire and my thoughts are with all of those affected. My thanks to the emergency services at the scene.”

Torrential rain and thunderstorms have caused flooding and travel disruption across many parts of central and eastern Scotland.

Network Rail said it was investigating the derailment.

ScotRail posted on Twitter announcing they are assisting emergency services at the scene.

“We’re assisting the emergency services with an incident near Stonehaven and will provide more information when available,” a statement read.