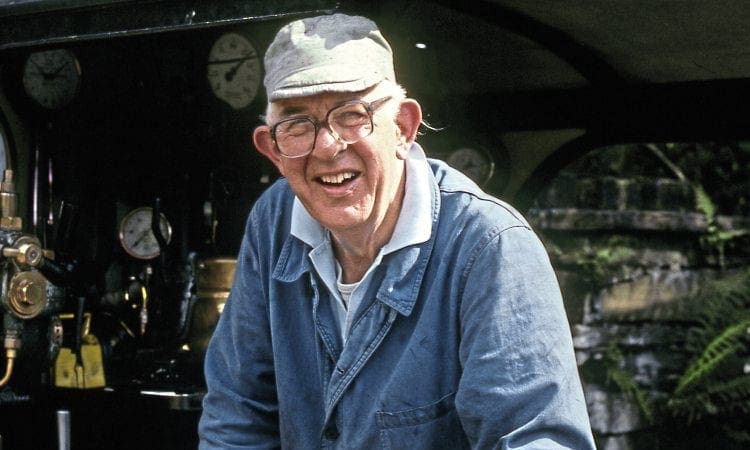 Richard Hardy, who died on February 18 2018, aged 94, was one of the last remaining professional links with the ‘Big Four’ and a railwayman who commanded as much respect in the preservation era as he did during his illustrious career with the LNER and British Railways.

Known affectionately in his autumn years as ‘the Grand Old Man of Steam’, and widely regarded as the elder statesman of the heritage movement, he made a meteoric rise through the rail industry’s hierarchy, becoming a shedmaster at the astonishingly young age of 22, running another five major depots before he was 35, and then overseeing the massive changeover from steam to modern traction on the busy Stratford district of the Eastern Region.

Unlike many of his fellow managers, Dick was a rail enthusiast at heart and never lost his passion for locomotives and their crews.

He considered himself first and foremost a ‘people person’ and estimated he had worked during his career with more than 25,000 men and women, many of whom became close friends and remained so for many years afterwards.

Born at Leatherhead, Surrey, on October 8, 1923, Richard Harry Norman Hardy was bitten by the steam bug at an early age, reading his first Railway Magazine at the age of five, and being given a tour of Doncaster loco shed two years later by a family friend, who just happened to be the depot’s chief clerk!

In 1934 the family moved to Amersham, Buckinghamshire, and 10-year-old Richard was soon spending most of his spare time at the town’s station, spellbound by former Great Central Railway engines and thrilled whenever their drivers gave him a wave.

He received a public school education at Wiltshire’s Marlborough College, but lost his father in 1938 and as a result his mother couldn’t afford for him to go on to university.

She did, however, have enough to pay for a four-year training course with the LNER and so, at the height of the Second World War in 1941, he signed on as a premium apprentice at Doncaster Plant.

One evening after work, the 17-year-old was offered an unofficial footplate ride and this set a trend that was to see him travel thousands of miles on his nights off, mastering driving and firing skills with some of the LNER’s greatest enginemen, including Ted Hailstone and Mallard record-breaker Joe Duddington.

All went well until he was spotted alighting from an engine at Wakefield by none other than chief mechanical engineer Edward Thompson, who recognised him from his job interview and demanded to know what was going on.

Dick thought it best to come clean but, instead of the expected carpeting, he was praised for his devotion and given an official engine pass!

That stroke of luck got him noticed ‘upstairs’ and after a suitable period of management training, he was appointed acting shedmaster at South Lynn in June 1946, charged with leading and disciplining men old enough to be his grandfather, let alone his father!

Any resentment the crews might have had towards the well-spoken ‘posh toff’ soon evaporated, however, for the new ‘gaffer’ was not the type to sit behind a desk all day.

If an engine wouldn’t steam or a driver had a grievance, the young chief would stride out into the yard himself to find out why – and he wasn’t afraid to get his hands dirty trying to fix the problem either.

That willingness to ‘muck in’ and learn from his elders, even though they were nominally subordinate to him, earned him enormous respect among enginemen. “I was worried they wouldn’t accept me, but luckily they realised I was an old head on young shoulders,” said Dick.

After a spell as assistant district motive power superintendent at Cambridge, the rising star landed his first full-time command at Woodford Halse shed in 1949.

He was still only 26 and in the odd position of being responsible for locos on a route he’d been
train-watching on as a lad just a few years earlier.

By now, Dick’s supreme man-management skills had become apparent and swift promotion to Ipswich gave him control of 90 engines and 480 men, followed in 1952 by the shedmaster’s job at Stewarts Lane on the Southern Region… 730 men, 126 steam locos, a fleet of EMUs and the demands of hundreds of train services a day, including the prestigious ‘Golden Arrow’.

However, even that was small fry compared with Stratford, whose four-figure workforce and 300-plus
locos beckoned in 1955. His personal highlight there (although he didn’t enjoy eliminating steam) came when he was given charge of the massive switchover to modern traction, an unexpected reward for his efforts coming when he was chosen to show HM Queen around the depot in 1960.

Three years later, the Beeching axe and other ‘rationalisation’ cuts were in full swing and Dick was by then in charge of Lincoln district, where he found himself in the unenviable position of having to implement the many rural line closures and job losses forced upon that county.

Better was to follow when he was put in control of the East Coast Main Line from London to Grantham as head of the newly created King’s Cross Division, but there was yet another promotion to come – head of British Rail’s Liverpool Division, where he took responsibility for 5,690 staff for half a decade.

The last years of his BR career were spent relatively quietly, running a small engineer-training department in London, from which he retired in 1982 at the age of 59. Afterwards he took on a host of advisory and honorary roles in the heritage field, the most high-profile of which was chairmanship of the Steam Locomotive Operators Association.

Five years ago, Dick was presented with The Railway Magazine-sponsored Heritage Railway Association Lifetime Achievement Award, to which prize he was still able to add another… his memory! For even well into his 90s, he was blessed with a remarkably strong power of recollection and could remember in vivid detail characters, conversations and experiences from the 1940s and 50s.

He was also a gentleman and treated everyone he met with the utmost courtesy.

His beloved wife Gwenda had pre-deceased him and Dick himself had moved into a nursing home last year as his powers began to wane. To many loyal members of his staff and modern-day preservationists, he was something of a god. Hopefully, he is now among them.

■ A two-part interview with Dick Hardy appeared in our April and May 2015 issues and a DVD recording of him and fellow LNER premium apprentice Peter Townend was presented with our August 2009 issue.

Read more News and Features at www.therailwayhub.co.uk/ and also in the latest issue of The Railway Magazine – on sale now!