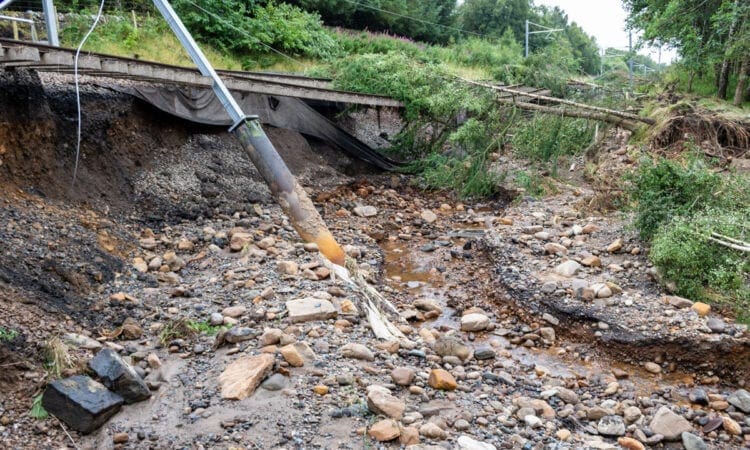 It could take months to reinstate the Edinburgh to Glasgow line as the scale of flood damage is revealed.

Network Rail will be working around-the-clock to repair flood damage on the main line near Polmont.

With the flood water subsiding from the tracks, engineers have now fully inspected the 300m section of track damaged where torrents of water cascaded from the damaged Canal above.

So extensive was the flood damage, initial assessments are indicating that it could take two months to reinstate the line though engineers will continue to investigate the extent of the damage before confirming a final estimate for restoring service.

The force of thousands of gallons of water flowing from the breached canal bank has completely washed away sections of track and undermined embankments.

The power of the flooding water also undermined and washed away overhead electrification masts and damaged others and left dozens of uprooted trees strewn across the tracks.

The canal water has also contaminated more than one kilometre of track and ballast which will need to be replaced.

Following unprecedented rainfall and thunderstorms on August 12, a 30-metre section of the Union canal at Muiravonside was breached.

This caused the water to cascade down the slope, flooding the railway between Polmont and Bo’ness on the main Edinburgh – Glasgow route via Falkirk High.

With the team on site liaising with Scottish Canals, the priority was initially to secure the canal in order to stop the flooding – which was achieved on the morning of August 14.

Inspections over the weekend have revealed the true scale and extent of the damage which has prompted the advice to passengers of ongoing disruption on the line for some time.

Kevin McClelland, Network Rail route delivery director, said: “We are working with our asset engineers and specialist contractors to assess the scale and extent of the damage and what we will need to do to safely reinstate the railway.

“It is remarkable to see the destructive power of the flowing water and the extent of the flooding and the scale of the damage is something I have never witnessed before on the railway.  We are grateful to our colleagues at Scottish Canals for their prompt response in dealing with this unprecedented incident.

“We are working as quickly as possible to complete these repairs and to get passengers back onto the railway.”

Passengers seeking to travel between Edinburgh and Glasgow/Dunblane should contact ScotRail for details on alternative transport routes and bus replacements.