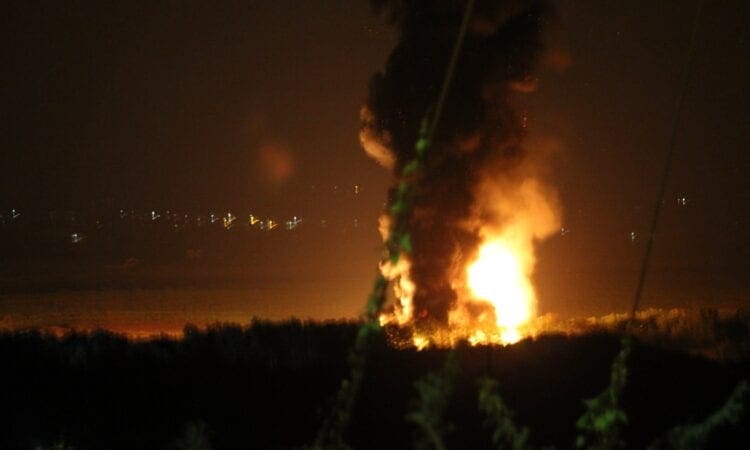 A freight train carrying diesel has derailed and burst into flames in Llangennech, South Wales.

British Transport Police were called to the scene at 11.29pm on Wednesday 26 August. Police said it had been declared a “major incident” due to the “initial risk of harm” to people nearby, and a cordon was put in place.

Two employees were on board the freight service. They have since been accounted for and no injuries have been reported.

As a precaution, people living within 800m of the fire in Llangennech, near Llanelli in Carmarthenshire, were evacuated from their homes on Wednesday night. They have since been allowed to return.

However, a cordon around the scene will remain in place and people are still being advised to avoid the area.

“The last incident involving an oil train fire was on January 30, 1984, when a Haverton Hill (Teesside) to Liverpool petroleum train carrying one million litres of four star fuel, caught first after derailing inside Summit Tunnel near Todmorden, on the Lancashire/Yorkshire border. The cause was a defective axle bearing. The fire burned inside the 2,885 yard long tunnel for four days.”

“It is not yet known what has caused this latest incident, so it would be wrong to speculate. Accident investigators will only be able to access the site when the fire is fully extinguished, and the remains of the wagons are cool and safe to inspect. There will be disruption to other services for several days too.”

British Transport Police Assistant Chief Constable Sean O’Callaghan said: “This is a significant incident. Resources from across BTP, South Wales Fire and Rescue Service and Dyfed-Powys Police have been deployed to the scene to mitigate damage to the surrounding area and ensure the safety of all those living nearby.

“The fire continues and there is still a substantial risk within its immediate vicinity, so our advice remains for people to avoid the area.

“Our officers will be conducting initial enquiries into the incident and are in the process of securing key witness statements and CCTV.

“Once the fire has been extinguished, and the scene is safe to assess and investigate, we’ll be working with the Office of Rail and Road and the Rail Accident Investigation Branch to establish the exact circumstances behind the incident.”