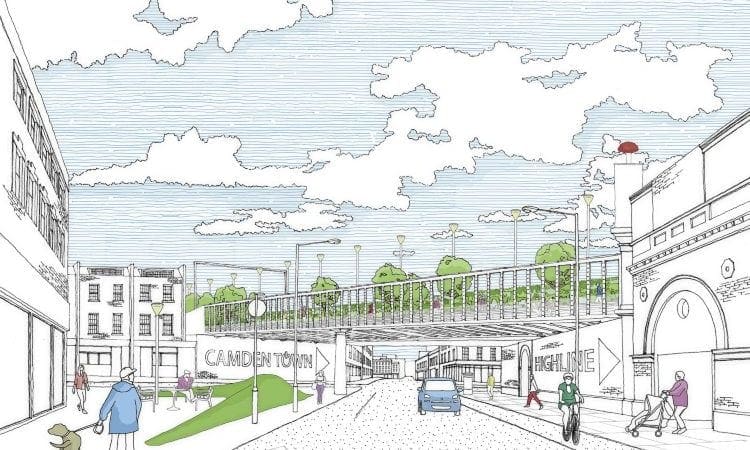 After the success of New York’s ‘High Line’ project, which converted a disused railway in to a hugely popular pedestrian walkway, Keith Fender looks at plans to bring a similar project to London.

NEW York was by no means the first city to develop a linear urban park based on an old railway line. Paris has that accolade (see panel), but the New York High Line has become a major tourist attraction in a short period of time, and has inspired similar projects all around the world. The 500-metre-long Sydney ‘Goods Line’ project, which opened in August 2015, also took inspiration from the longer 1.45-mile-long New York High Line.

The New York High Line was built from the 1920s by the New York Central Railroad to replace a street-level route that ran along Manhattan’s 10th Avenue on the city’s West Side, then home to wharves and warehouses and the city’s main meat processing industry, which exported around the world from the nearby docks.

The street-level railway was busy, but accidents between trains and people were so common (more than 540 people had been killed by trains by 1910 alone). So in 1924 the city authorities required the New York Central to put the railway on elevated viaducts above the streets. Other cities, notably Chicago, had taken similar steps earlier in the century and seen accident rates decline.

West Side
The West Side Elevated Line as it was officially known first opened in 1933, but everyone called it the High Line as it was high above the streets.

The new line replaced 105 level crossings, and even went through some buildings, plus had sidings to serve factories. It was soon being used to transport millions of tons of meat, cereal and other food stuffs to processing plants on the West Side.

Its decline started in the 1960s as larger trucks and improved road links meant traffic switched to road. Many of the factories and meat packing plants closed, moving to the suburbs.

By the early-1980s the line was no longer used by trains. Some parts were demolished in the 80s and early-90s, and some local people called for the remainder to be demolished.

Mayor Rudy Giuliani actually authorised full demolition in 2001 despite (or perhaps because of) what was then a mounting public campaign to retain the old railway and turn it into an urban park.

Friends of the High Line charity was founded in the late-1990s. They campaigned to prevent demolition, and ran a competition to suggest ways the new park could be used.

By 2004 the ‘Friends’ had gained support from new mayor Michael Bloomberg, and planning approval for the conversion was granted. In 2005 railroad CSX Transportation, which owned the line and its structures, gave it to the city of New York, and in April 2006 construction work began, paid for by donations raised from the public.

Read more and view more images in the January 2019 issue of The RM – on sale now!