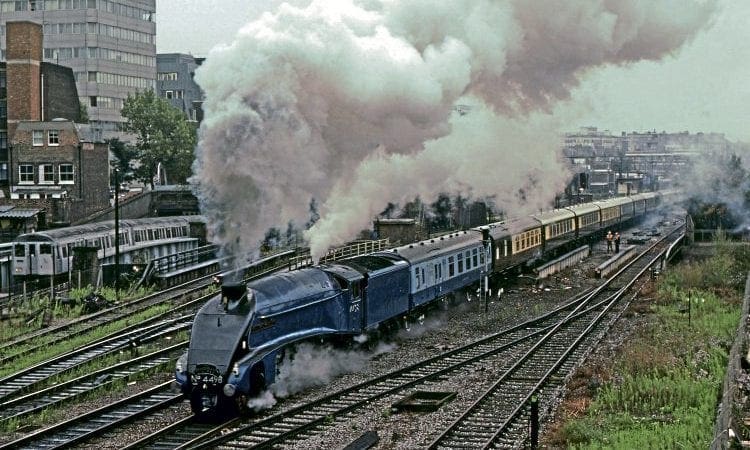 In his latest column, Don Benn describes the performance of Merchant Navy Pacific No. 35028 Clan Line at the head of UK Railtours’ charter ‘The Chilterns and Downs’ from Paddington to Victoria, via Oxford and Shalford on November 24.

I don’t like the long, dark days of winter and so avoid anything which means timing in the dark for any length of time. Many charters are timed not to return until very late, which even if they are in the south sometimes means a struggle to get home at all on the same day.

I was therefore very pleased to see that UK Railtours was running a short day circular trip on November 24, with No. 35028 Clan Line, ‘The Chiltern and Downs’.

This trip was bound to be popular and so I booked early in common with a small group of other exiles from the real days of steam. We arrived at Paddington over five minutes early on one of the Great Western Railway’s new Class 800 IET trains, which gave me my fastest ever time up from Reading in 22 minutes nine seconds – very impressive.

We then convened for breakfast in the station’s Mad Bishop and Bear bar, before joining our charter in platform 9.

The very helpful people in the office at UKR had kindly put us group of ‘old timers’ together in the end passenger coach, as requested, but of course they don’t know which end of the train it will be.

Unfortunately, we were at the back of what proved to be 13 carriages, including the generator and support coaches. This weighed in at 469 tons tare and as it was full, about 505 tons gross, a substantial load even for a class 8 steam loco, especially on a grim and damp November day, with a number of significant climbs ahead.

I wondered whether theClass 66 which had brought the stock in would stay with us, but by the time I had walked the length of the train and back to check the locomotive, crew and load, it had been uncoupled.

Table One shows the first section to Princes Risborough, which was full of interest as it included the section from Old Oak Common West to Greenford, over which we were the last passenger train and also the climb to Beaconsfield.

In charge up front were Graham Ward and Jim Clarke with traction inspector Geoff Ewans. A steady start was made two minutes late before getting adverse signals and running onto the section to Greenford at Old Oak Common West.

Up the 1-in-264 to Northolt, speed rose to 34½mph before we were stopped at South Ruislip waiting for our path. On the restart we reached 56mph over the Grand Union Canal and then hit the 1-in-175 at Denham doing 54½mph, but caught the train in front which had passed us at Ruislip. This wasn’t clear until after Seer Green, so the rest of the climb was ruined.

Back in the 1980s there were regular steam-hauled charters out of Marylebone with a variety of locos and Table Two shows the running of No. 60007 (4498) Sir Nigel Gresley on one of these on December 6, 1987.