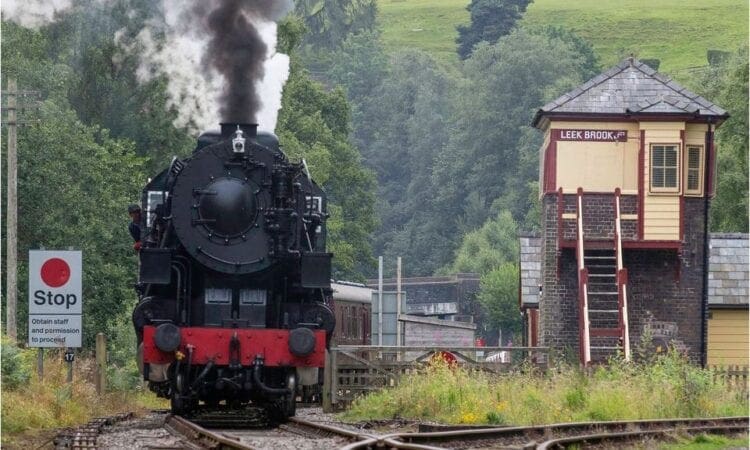 Thieves have targeted the Churnet Valley Railway – breaking into storage containers and stealing thousands of pounds worth of signalling equipment.

Churnet Valley Railway says thieves entered the railway’s private sidings at Froghall and cut through three security locks to access a storage container with the equipment inside.

Some of the stolen equipment had been designated to help with the planned re-opening into Leek. The Railway has now launched an appeal.

What was stolen from Churnet Valley Railway?

A large quantity of interlocking equipment, which prevents multiple routes being set by the signalling system and therefore protects trains from meeting one another on the same stretch of railway line, were taken.

A statement from Churnet Valley Railway reads: “With the number of mechanical signal boxes decreasing on the mainline in recent years as they are replaced by more modern systems, the availability of spares is decreasing significantly and so this is a bitter blow to the line’s volunteers.”

“The equipment stolen cannot be bought off the shelf, the railway must wait for completion of upgrade projects on the mainline from which equipment removed can then be purchased. With over 100 other preserved railways in the UK mind, there is a reasonably high demand for such and so the line could be forced to wait over a decade to be able to replace the full amount of equipment lost in this latest attack.”

The theft comes at an difficult time for the heritage railway because of lockdown restrictions forcing closure from March. Despite being able to open for the summer holidays, the Railway’s finances are still tight.

“Even though the revamped services have proved popular so far, the loss of income from the shutdown has not been recovered and in spite of significant support from the local authority, the railways bank and suppliers; this is one hit the railway just could not afford,” the Churnet Valley Railway added.

Churnet Valley Railway has now launched an appeal for donations to improve the Railway’s site security – including plans to install a new perimeter fence, upgrade CCTV and other electrics.

The charity is hoping to raise £8,000 to cover the costs. Click here to visit the donation page on the Churnet Valley Railway website.

The Railway has also warned potential trespassers to steer clear of the tracks.

“Churnet Valley Railway has suffered from extensive trespassing, particularly since lockdown where many believe the railway to be closed and therefore open to walkers. Just as a reminder, trespass on railway property is unacceptable at any time as non-publicised engineering trains can operate any time of day or night.

“Trespass on railway property is a criminal offence, not a civil offence as many of those caught have tried to claim. Ignorance is not an excuse, and we will continue to deal with all trespassers as required in order to try and get this message across.”