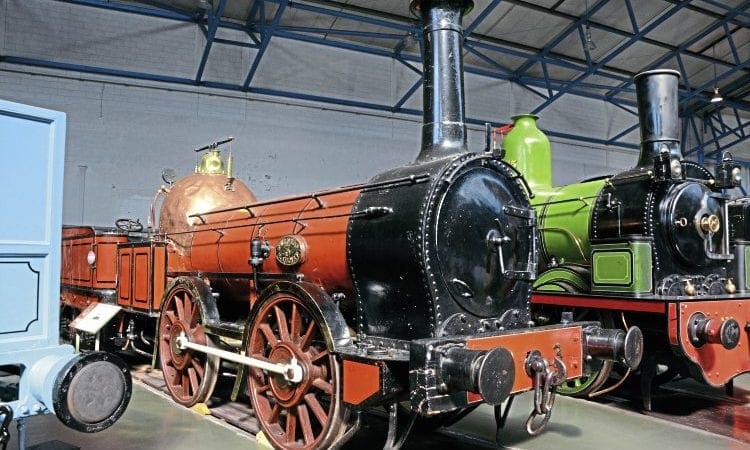 The period from 1840 to 1850 saw continuing rapid progress in steam locomotive design. A new generation of engineers was coming through and the designs of steam pioneers such as Timothy Hackworth were being quickly superseded.

While Hackworth was the locomotive superintendent of the Stockton & Darlington Railway, he designed an 0-6-0 goods locomotive, No. 25 Derwent, which was built in 1845 by William and Alfred Kitching. It was similar in design to two of the company’s 1842-built locomotives, Leader and Trader, with outside cylinders fixed at the trailing end of the boiler and 4ft diameter coupled wheels.

By comparison with the products of later in the decade, this was quite an ancient looking locomotive. Withdrawn from service in 1869, it was sold to Pease & Partners for use on its colliery lines and spent some time at the construction of the Waskerley reservoir.

It took part in the Stephenson Centenary celebrations at Newcastle in 1881 and the Queen’s Diamond Jubilee in 1897.

Derwent was presented to the North Eastern Railway in 1898 for preservation and after restoration, the locomotive ran under its own steam in the 1925 Stockton & Darlington centenary procession. On trials before the procession, it achieved a speed of no less than 12mph!

It was put on display alongside Locomotion No.1 at Darlington Bank Top station until the 1970s when it was removed and restored to near original condition. It is now on display at the Head of Steam museum in Darlington North Road station.

The first part of the Grand Junction Railway (GJR) was opened in 1837 and in 1846 was amalgamated with the London and Birmingham and Manchester and Birmingham railways to form the London and North Western Railway. It was the inaugural long-distance steam worked trunk railway in the world, which now forms the central section of the West Coast Main Line.

Engineered by George Stephenson and Joseph Locke, the GJR locomotives were mainly built by Robert Stephenson and Sharp Bros. It established its chief engineering works at Edge Hill in Liverpool but moved them to Crewe in 1843.

Interestingly, Francis Trevithick, the son of pioneer steam engineer Richard Trevithick, was appointed resident engineer on the GJR between Birmingham and Crewe in 1840. In 1841 he progressed to the position of locomotive superintendent at Edge Hill locomotive works.