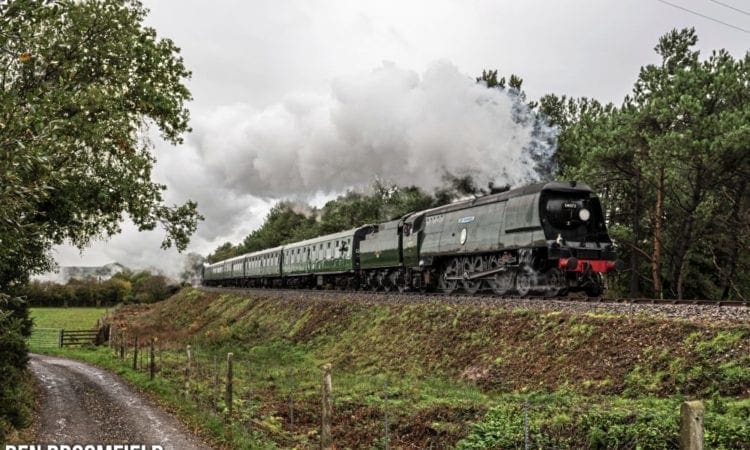 Ben Broomfield sent in these great photographs, check out his story of the unrebuilt BOB Bulleid 34072.

“One of my main aims has been to capture my local heritage railway (Swanage Railway), in its natural preserved, steaming glory with many of our home fleet but also visiting locomotives.

“My goal over our recent ‘The Exchanges Gala’ for 2018 had been to capture newly overhauled Bulleid ‘257 Squadron’ no. 34072 along the Swanage Railway. As a volunteer of the railway, lineside access was easily acquired and walked 9.5 miles up and down the line, capturing our loco’s within the natural environment of the Purbecks almost giving a reminiscent vibe of the old days of steam.

“The first image of 257 was the highlight of the gala entirely; shot near Furzebrook, i was able to capture the power & the recognizable style of the unrebuilt Bulleid, being top & tailed with Black Five no. 44871. It was a exhilarating event, even the fireman of 34072 (Jack Haines) got excited and waved his greasetop hat about!

“The second image was one of my favorites in terms of tranquility and the whole environment of the Purbecks within the image, of which i think is really beautiful! Shot near Cow Pat UWC, it was really out of the blue, as our timetable that day was all over the place – i was expecting something else but it so happened a Bulleid appeared! I was lucky with the sun as it nearly was covered by some cloud but i’m so glad it wasn’t – it almost reflects a S&D vibe from all those years ago?!

I hope many enjoyed the gala! My thanks to the committed volunteers on the Swanage Railway, as this wouldn’t have been possible without them!”