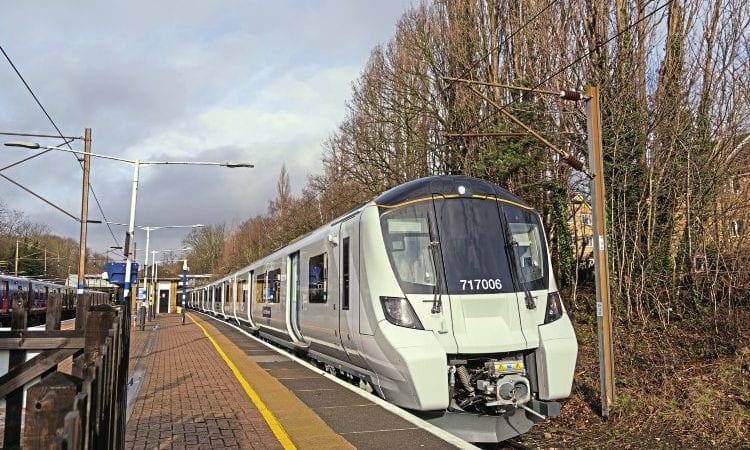 Peter Brown takes a ride on the new Class 717 EMUs, which over the next few months will transform Great Northern services from Moorgate by replacing trains more than 40 years old.

Growing up as a boy in leafy north London my memories are still vivid of Grange Park station, where I used to stand and watch the Gresley-designed ‘N2’ tank engines getting closer and closer, having left Winchmore Hill on their regular journeys hauling compartmented ‘Quad-Art’ coaches on services between Moorgate/King’s Cross and Hertford North.

On Sundays, during the main line widening at such locations as Hadley Wood and Potters Bar, my father and myself would climb into the loft to peer out of the roof window to see what trains were being diverted through the Hertford Loop, and if it looked promising we would get in the car and go to a favourite spot of ours where a footpath ran across the line for the purpose of golfers at Crews Hill.

There, we would marvel and spot ‘A4s’, ‘A3s’ and others making their way to and from Scotland and the north-east of England.

As time went on, changes were made that saw a regular service hauled by diesel multiple units and suburban passenger stock in the charge of Class 31 diesel locomotives.

However, my most vivid memory of that era at our local station was while waiting to catch a train seeing heavy Class ‘9F’ steam locomotives pulling as many as 80 wagons loaded with coal from the North East mines on their way to Ferme Park yard.

Standing on the platform there was an experience that will never be forgotten, which forced passengers like me to hang on to the station fencing as the wooden slats shook while these trains rolled by.

On a recent visit to Grange Park, I found the station retained its rural look, but the wooden platforms had long gone, having been replaced by concrete.

For more than 40 years, Class 313 electric multiple units have served the Great Northern routes well, although in recent times they have looked rather tatty and tired – but still managed to hold a regular service together serving the routes from Moorgate, King’s Cross to Hertford North, Watton-at-Stone via the Hertford loop, and providing a local service on the main line to Welwyn Garden City.

And, after some delays, the long-awaited 25 six-car purpose-built trains are now being phased-in, two at a time to operate on one of the most unusual but highly used routes in Britain today.

It is without a doubt the biggest change to be seen within the (at-times) much-criticised Govia Thameslink Great Northern franchise, and one which commuters have been waiting for.

The Class 717 dual-voltage trains have been built by Siemens for the exact needs of the route, which is a mixed bag of railway, fighting to be in the 21st century, but with limitations caused by some sections of the route unable to be modernised at the present time, although work on a new signalling system is expected start in 2020 and be commissioned the following year.