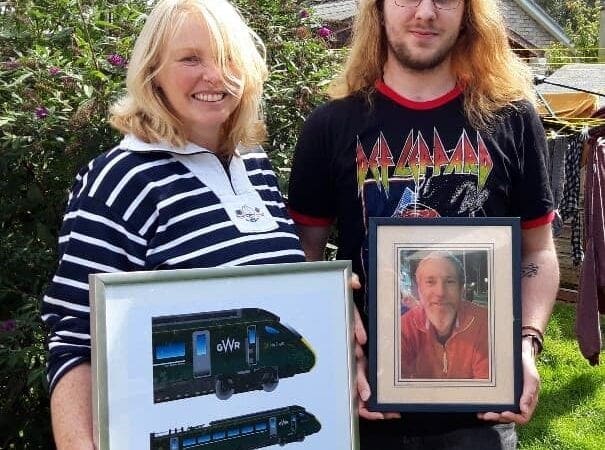 Community heroes who selflessly helped others during the peak of the COVID-19 pandemic will have their names added to the side of Great Western Railway trains in the coming weeks.

It follows the BBC’s Make a Difference Superstars competition launched last month to celebrate those who are going above and beyond to help others during the pandemic.

The move comes after Captain Tom Moore, the veteran who raised more than £29 million for NHS Charities Together to mark his 100th birthday, had a Great Western Railway Intercity train named in his honour.

GWR Interim Managing Director Matthew Golton said: “The GWR has a long and proud history of naming trains after Great Westerners – past and present heroes from across our network.

“It has been a privilege to partner with the BBC Make a Difference campaign and learn more about people who have helped to make such a huge difference in their communities during the pandemic.

Rail Minister Chris Heaton-Harris said: “I have been blown away by the efforts of all the COVID-19 heroes during the course of the pandemic. Their dedication and compassion has been truly heart-warming, and made a huge difference in their communities.

“These trains will be a lasting reminder of all those who have gone the extra mile to keep this country going.”

Who are the Great Western Railway heroes?

The pair from Bristol will have their names to be added to either end of a high-speed Intercity Express Train. Click here for their full story.

Kieron (above), from St Newlyn East, near Newquay, had to shield during lockdown because of his genetic disability but sponsored walks saw him raise £5,135 for the COVID-19 fund and Child Health at the Royal Cornwall Hospital in Truro.

He raised a further £585 for the Acute Liaison Nurses at RCH on his 18th birthday, proving himself to be a true inspiration and helping those around him through lockdown.

Don has made a huge difference to the people of Camborne since getting involved with the local foodbank, particularly during the pandemic.

He has helped to ensure families receive food supplies and that children entitled to free hot meals continued to receive them during the school holidays.

A pair from Devon have also been chosen to feature on Great Western Railway trains.

Preston (above) has inspired those around him in the village of Cornwood in the South Hams, promoting initiatives to build community cohesion, reduce isolation and support struggling families.

He helped to introduce a weekly ‘Coffee Shop’ and foodbank in the village hall, and set up a Good Neighbours Scheme to ensure every house was supported by at least one volunteer who could shop or run errands for those self-isolating or whose normal routine had been disrupted by the pandemic.

Jeremy rallied to the aid of residents in Totnes by organising a support group to assist with shopping and carrying out a series of DIY jobs including constructing a wooden bench, fixing a neighbour’s car, helping with IT issues and even feeding a young person’s rabbit.

But his biggest impact was arranging and playing in three socially-distanced concerts in his street, arranging for the concerts to go out live on Facebook for others to enjoy.

Food delivery champion Emma Hurrell and fancy-dress runner Martin Heath, both from Gloucestershire, have been chosen as BBC Make a Difference Superstars.

Emma (above) works at the Long Table social enterprise initiative in Brimscombe, near Stroud, providing healthy ready meals for the people of Gloucestershire.

She and her team could have easily decided to go on furlough at the outbreak of the pandemic, but instead created the Feeding the Five Thousand campaign, delivering 40,000 meals across the county, with 80 per cent of these being given out free. They fed NHS frontline workers, people in homeless shelters, those on low incomes and people who were shielding or quarantining.

Martin, dubbed the Mitcheldean Running Man, clocked up a total of 440 miles over 101 days, raising community spirits by running in a different fancy-dress costume every day.

More than 300 villagers turned out to cheer him on for his last run and he was even given a police escort. Martin’s gruelling efforts helped raise £840 for Muscular Dystrophy UK and £1,390 for Great Oaks Hospice Forest of Dean.

Mazen (above) moved to Bromsgrove as part of Worcestershire County Council’s refugee settlement programme and said he wanted to give something back to the community that had welcomed him.

He made films to present the town in a positive light and also volunteered for the Bromsgrove Community Support Group, running countless errands to help vulnerable people during lockdown, delivering supplies including pharmacy descriptions on his bike.

When the country went into lockdown, Charlotte set up the Stourport Mutual Aid Facebook group to help isolated people in Stourport-on-Severn.

Dozens of volunteers came forward to support hundreds of families in the area, delivering Easter treats, food and prescriptions, as well as providing dog walking services and telephone buddies.

Charlotte, who has since set up a mini foodbank, said she had been inspired to help by her grandad, Terry Murphy, who had been worried by the plight of others like him during the pandemic. Mr Murphy has since passed away.

Liz (above), a nurse of 40 years’ experience, delayed her retirement to stay on as ward manager of the Intensive Care Unit at the Great Western Hospital. She ensured they had enough ventilators and PPE and also set up a second unit to cope with COVID-19 patients. She has since ‘retired’ but is back at the hospital in a part-time nursing role.

Naomi created a ‘mask tree’ to hang the face coverings she had been sewing for anyone in the community who needed them. Her social media post went viral and to date 418 ‘mask trees’ have been registered across the UK.

Stephanie Marshall, head of the BBC in the West and South West, said: “The pandemic may have been the worst of times for many of us, but it has brought out the best in so many people.

“Since lockdown began nearly two million listeners have contacted their BBC local radio station either looking for help, or in many cases offering it out through the Make a Difference campaign.

“The stories of local heroism have helped put a smile on faces across the country and I’m incredibly proud that our local radio teams played a part in that.”