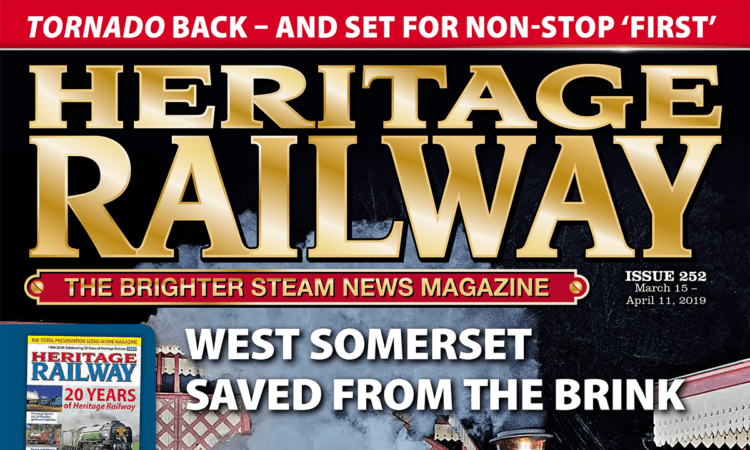 West Somerset saved from the brink! Tornado is back! Blue Caley joins Cotswold Festival of Steam! Issue 252 of Heritage Railway magazine has got the lot!

As ever, this month’s issue is packed with the best features on our heritage railways, our Railwayana column, up and running guides, the latest news and much more!

If you’d like to read this edition of HR, then you can cut to the chase and download the digital version, order the print magazine, or better yet save those pennies and subscribe to Heritage Railway. Here’s what to expect this month…

COUNTING THEIR BLESSINGS |As the Churchward County Trust celebrates its first anniversary, project leader Gary Boyd-Hope explains more about the scheme to build Great Western Railway 4-4-0 No. 3840 County of Montgomery.

BRIGHTON BELLE ON COURSE |We tell the story of the project to recreate the famous Brighton Belle luxury dining train.

PLUS! All the main line news, your headlines, Platform shows off your views and check out our guide to railways running this season!

Heritage Railway magazine is on sale in UK newsagents and supermarkets, and you can buy the current issue in digital and paper formats here!

You can also buy stacks of back issues of HR, but it’s cheaper to subscribe. Subscribers save money, get their copies delivered to their doorstep and never miss an issue!

This issue marks the end of the 20th year of Heritage Railway, coming two issues after our landmark 250th edition, and one before our actual 20th anniversary.

It seems like yesterday that we launched what we hoped would be a fresh, unfettered, modern outlook on the preservation scene, and not only were we welcomed by the railways and public alike from the outset, but over the years we have made many lifelong friends along the way.

I must extend an immense debt of gratitude to each and every one of our contributors who, more than anyone, have made us what we are today.

In this issue we include a free 32-page booklet celebrating our first two decades and outlining some (I repeat, only ‘some’) of the many brilliant adventures we have enjoyed and the big news stories we have covered in that time.

In this issue, we report on another milestone – the official launches of the 149th and 150th locomotives to be restored to steam from Barry scrapyard condition – during our first year, we reported on the 100th.

Over the past 20 years so much has visibly changed, not least of all attitudes and approaches, and in many ways the heritage movement of today is scarcely recognisable from the one I followed as a young teenager in the Seventies.

The stance of many local authorities, for one, has transformed from uniformed NIMBY opposition, to begrudging acceptance, to open encouragement. Councillors by and large are now switched on to the multiple benefits that heritage railways will guarantee their tourist economies.

We now look to the phenomenal successes that have been Swanage, Whitby and now Broadway being repeated at Corwen, Leek and, hopefully, a rejoined Robertsbridge to Tenterden.

Another big player to enter the fray has been the Heritage Lottery Fund, dispensing grants that have made many a ‘mission impossible’ become reality to the betterment of our historical treasures as prime educational resources.

However, most pronounced of all has been the 21st-century steam building industry, of which the flagship is A1 Peppercorn Pacific Tornado. Half a century ago it would have been unthinkable for revivalist groups to even dream about building their own full-size locomotive to fill in the missing heritage gaps left by the cutter’s torch.

Yet in 2019 we stand on the threshold of the debuts of GWR 4-6-0s Saint Lady of Legend at Didcot next month, and hopefully Betton Grange in the coming months. We also look forward to the completion of BR Standard 3MT No. 82045 at Bridgnorth.

This economical and versatile locomotive is a prime candidate for batch building to provide effective modern steam motive power for our heritage lines in future decades.

In this issue we major in on one of the latest standard gauge new-build schemes, that of a new Churchyard County (see above).

As Tornado’s builders will tell you, the key to the success of any new-build project is to ensure the funding steams work, and so far the County 4-4-0 project is ticking the right boxes, richly deserving the support of all.

And to be based at the current ‘buzz’ line, the Gloucestershire Warwickshire Railway, who knows how fast it might happen?

Here’s looking ahead to another brilliant and unforgettable 20 years!