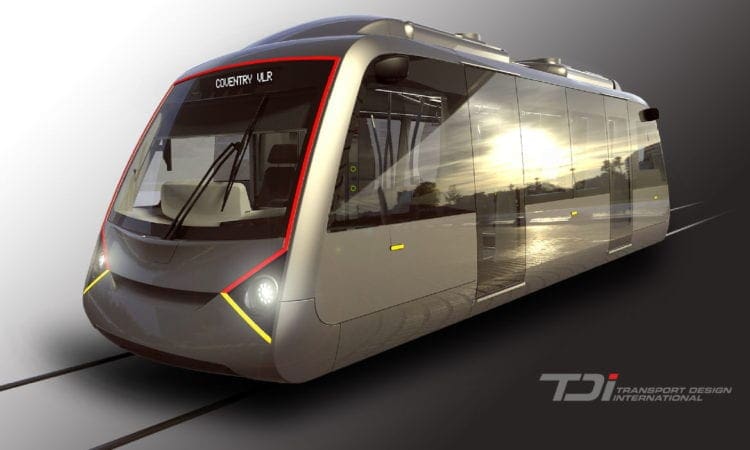 A NEW design of a new very lightweight rail vehicle (VLR) could be running on the streets of Coventry by 2024.

It’s design could revise thinking for cities keen to adopt VLRs as a way of cutting emissions, but the creativity behind the design and track would make construction far cheaper and less disruptive than schemes to date.

Engineers and researchers at WMG (Warwick Manufacturing Group), at the University of Warwick, have been working alongside Transport Design International (TDI), based in Stratford-upon-Avon, to develop a battery-powered, lightweight, rail-based vehicle to operate in Coventry.

WMG is a leader in research, education and knowledge transfer in engineering, manufacturing and technology, and its expertise in automotive engineering and battery technology has assisted TDI with the design of the vehicle for Coventry City Council. The project has progressed to a 3D simulation of the vehicle.

The next stage will be the construction of a prototype, which will progress over the next 12-18 months and have a capacity of 50-60 passenger. It will be of a lightweight design using multiple materials including aluminium, steel and composites.

When the new VLR vehicle is complete in mid-2020, it will be tested on a special test track to be constructed at Dudley, (West Midlands). TDI has partnered with Coventry-based Company RDM who will manufacture the vehicle once the design is complete.

One of the major problems with the construction traditional tram or light rail systems is the intrusive and disruptive nature of the infrastructure. This begins with movement of underground utilities ahead of tracklaying. The overhead masts for the power supply are unsightly too.

To counter this, a new track system is being designed for the VLR, the intention being it will not need so much movement of utilities as excavations to install the track will not need to be as deep. Being battery powered, there will be no unsightly support masts.

This, say the designers, will have the effect of halving the cost per mile for a conventional tram system from £15-20million per mile to around £7million for a VLR system, making it a far more palatable option for medium and big cities desperate to cut congestion and improve air quality.

With no emissions, the designers say recharging the VLR will take place at the end of each journey. A re-charge will take around 10 mins , completed in the turnaround time between journeys.

The project is backed by the West Midlands Combined Authority (WMCA) Devolution Deal who have provided £12.2m in funding. Also behind the scheme is  Coventry and Warwickshire Local Enterprise Partnership (CWLEP) which has contributed £2.46 million towards phase one of the research and design of the prototype. The WMCA has also allocated specialist resource from Transport for West Midlands to provide technical support, advice and guidance to the project team as the scheme develops.

Being designed in Coventry, it’s no surprise that the city is intended to become the proving ground for this first VLR system. Councillor Jim O’Boyle, Coventry City Council cabinet member for jobs and regeneration said the plan is for the first line to run from the railway station to the city centre and University Hospitals Coventry and Warwickshire at Walsgrave in the north east of the city. The actual route is yet to be decided.

Although 50 passengers may seem a small number, headways between trains could be around 3 or 4 mins, so providing passengers with a genuine ‘turn up and go’ transport system similar to London Underground, but also one which provides the impetus for a genuine modal shift in individual travel patterns.