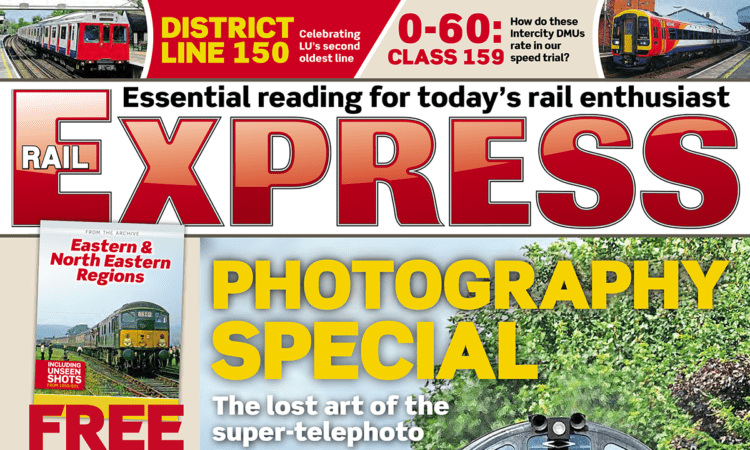 Network Rail to devolve into regions (again!), Thunderer back on railtour duties, and GWR to host an open day at Long Rock depot. The latest issue of Rail Express is packed with modern traction news, nostalgia and modelling.

If you’d like to read this edition of RE, then you can download the digital version, order the print magazine, or better yet take out a subscription for the best value offers. Here’s what to expect this month…

THE LOST ART OF THE SUPER-TELEPHOTO |A photography special looking at the dramatic effects possible using 300mm+ lenses for railway subjects.

THE APPLE OF THEIR EYE |Report on the growing campaign to reopen the March to Wisbech line in Cambridgeshire.

0-60: CLASS 159 |They run inter-city services to the South West, but do they have InterCity performance?

MODELLING |News of not one but two Class 92 models, plus a review of the new Farish Pullman DMU set.

Rail Express is on sale in UK newsagents and supermarkets, and you can buy the current issue in digital and paper formats here!

You can also buy stacks of back issues of RE, but it’s cheaper to subscribe. Subscribers save money, get their copies delivered to their doorstep and never miss an issue!

Great images are a key part of Rail Express, not just for newsworthy items but also more ‘arty’ takes on everyday workings, and we like to champion the cause of railway photography as much as possible – whether it’s taken on a camera phone or a high-end DSLR.

So this month we’re featuring Simon McComb’s super-telephoto work – that is shots taken with lenses of focal lengths greater than 300mm – a style that seems to have been largely overlooked in recent years with the proliferation of digital cameras that have much less powerful lenses.

The results speak for themselves (see pages 16-21) and offer a refreshing change from a standard ‘three-quarter’ type of shot. Such lenses are not exactly cheap, of course, although there is a decent second-hand market now where bargains can be found making them worth an investment.

If any other readers are already using such lenses, we’d really like to see some of your results, so please do get in touch for a future follow-up article.

No. 55009’s return to railtour duties at the start of March was hit by a traction motor failure soon after leaving Edinburgh, and sadly it had to be rescued later at Berwick (see page 9). This is not an occasion for complaint, however.

Rather it is a reminder of the magnificent job the Deltic Preservation Society – and all other similar groups running main line heritage traction – does in keeping some of our favourite locos at work. Class 55s are 60-year-old technology running on a modern high speed railway, so the odd technical hitch is perhaps bound to happen.

What we can be sure of, however, is the dedication of the DPS in getting Alycidon back up and running as soon as possible. And for that they deserve our deep thanks.