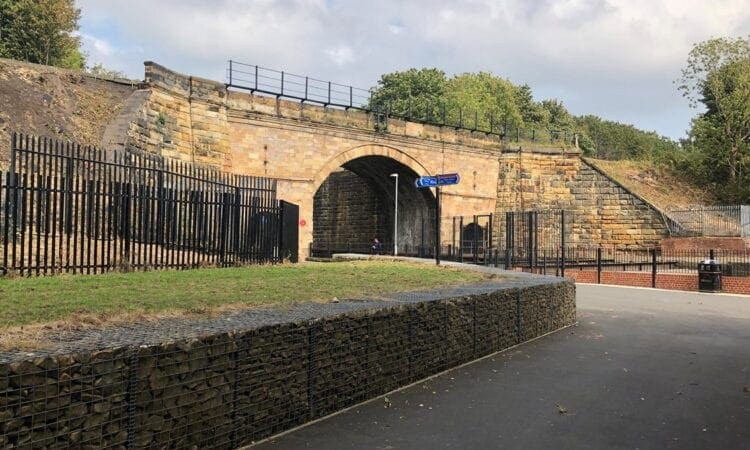 Network Rail has carried out improvement work on Skerne Bridge, the oldest railway bridge in the world in continuous use, days before its 195th anniversary.

Teams in Darlington have removed plants and weeds which were growing out of the stonework on the bridge and have cut back some of the trees next to the railway. Managing the vegetation has made Skerne Bridge more visible for people in Darlington and will help to keep trains running safely and reliably.

Graffiti on Skerne Bridge has also been removed and sections of it repainted. Network Rail has worked closely with the A1 Steam Locomotive Trust and Darlington Borough Council to brighten up the area and bring the bridge closer to its former glory.

Skerne Bridge officially opened on September 27, 1825 to carry the Stockton and Darlington Railway over the River Skerne. This was also the first time members of the public could travel by steam train. The bridge is on Historic England’s ‘100 Places’ list and appeared on the five-pound note.

Today, services on the Darlington to Bishop Auckland line run over Skerne Bridge, which is around half a mile from the East Coast Main Line.

Paul Rutter, Route Director for Network Rail’s East Coast Route, said: “Skerne Bridge is a vital part of our railway history, and I’m proud of our teams for carrying out this work ahead of the 195th anniversary, so it can be celebrated by people in Darlington and showcased to those visiting the town.

“The bridge carried the first passenger trains and it will remain an essential part of Darlington’s railway for years to come.”

“As the custodians of Darlington’s modern manufacture of steam locomotives, it is wonderful to see the world famous location recognised as the birthplace of the public railway fit for the celebrations.”

Councillor Heather Scott, Leader of Darlington Borough Council, added: “I am delighted that this work has been carried out by Network Rail in time for the bridge’s 195th anniversary. Darlington has a rich railway heritage and this bridge forms a key part of it and will no doubt feature in our forthcoming plans to celebrate the 200th anniversary of the railways in 2025.

“This is an important piece of railway history and it is vital that it is protected and maintained for future generations to use and enjoy.”