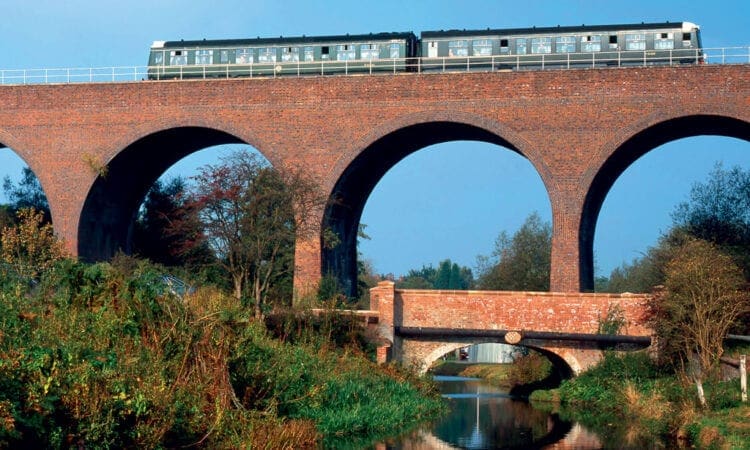 The Severn Valley Railway has undertaken a vast job in making repairs to the Falling Sands Viaduct, as Editor Mark Nicholls explains.

The UK’s many heritage railways face a constant battle to keep running, as the cost of maintaining rolling stock, insurance, wages for permanent staff, publicity, building upkeep and a host of day-to-day items all put pressure on funds. But one item above all others can be the most critical – the integrity of various items of infrastructure along the line.

Bridges in particular can be expensive to look after, especially larger ones, and the vast majority are more than 100 years old. Admittedly they were built to last, but time is the enemy here as corrosion and structural weakness can take hold.

In the RI April issue we reported on the huge job of replacing Bridge 37 at Goathland on the North Yorkshire Moors Railway, but at the same time another colossal engineering job was under way at the Severn Valley Railway.

Repairs to the spectacular Falling Sands Viaduct on the outskirts of Kidderminster. It crosses the River Stour and the Staffordshire & Worcestershire Canal, and has endured a 10mph speed restriction for many years.

The need for significant work to the viaduct was identified by the SVR Structural Line Report in 2013. This was followed in 2014 by work conducted by CAN Structures, which removed vegetation, surveyed the extent of the deterioration and established an initial budget for repairs.

This emphasised the urgency of the project because without repairs the deterioration would accelerate, putting the viability of the entire line at risk.

Working on such a large and tall structure has its risks, so safety of the workforce had to be ensured as well as agreement on the correct methods to complete the job. The track was lifted from the viaduct on December 30/31, 2019 by the Permanent Way volunteers and staff. The fill material was then removed to reveal the viaduct’s seven arches, all of which were found to be in good condition.

Once the sandy fill material had been carefully excavated, including the removal by hand of the material around the medium pressure gas main that runs over the top of the viaduct, it was possible to see the original 19th century pitch, which had cracked in places and was clearly contributing to water ingress into the viaduct’s brickwork causing cracks, erosion and missing mortar joints. These needed sensitive repairs, including the restoration of the line of corbelling along the parapet.

The original iron drainage pipes were also revealed and were in good condition. Contractors Walsh Construction put glass reinforced plastic liners into the old pipes and sealed them with a polymer sealant/mastic. The plan, although not yet confirmed, is to form a ‘shutter’ at the end of the existing pipe to create a small sump.

During the removal of the fill the contractors found several of the large blue bricks that comprise the corbelling string course across a section of the viaduct, as well as an original navvy shovel – in a state of some disrepair, as you might expect!

Concrete was poured over the Viaduct’s arches in late January before being treated with Leoseal as a waterproof membrane. Once the concrete had set, Walsh began to reinstate the fill material in preparation for the track relay and reinstatement of signalling infrastructure.

The project is on course for completion in mid-March, with the reopening of the line planned for April 4. Further repairs to the viaduct’s brickwork will continue during 2020 as this doesn’t require closing the line to traffic. As well as the repairs to the viaduct, the busy Easter break. However, this has all changed due to coronavirus outbreak.

“Games development students are designing games to share the history of the viaduct in an exciting and engaging way; these games will be tested by local primary school children and made available on the FSV website, www.fallingsandsviaduct.org.uk.

“Secondly, students from the brickwork department braved the rain in mid-January to have an on-site tour with Civils Project Manager Jonathan Symonds and infrastructure volunteer Nick Yarwood, who has made a huge contribution to this project and deserves special thanks.

“We’ve received spectacular support from a range of volunteers for this project, in particular, those who have voiced the new characters who will tell the story of the viaduct in both the mobile exhibition that will be housed in the Stove R brake van No 2886, and the major installation planned for Th e Engine House Visitor Centre at Highley.

“Alongside this there will also be a ‘build your own viaduct’ game and a range of dressing up costumes, enabling children to step back in time and learn more about the loop line between Kidderminster and Bewdley.”

The SVR has done a superb job ensuring he viaduct continues to serve its purpose for many years to come, but it also highlights the type of massive challenges the UK’s heritage railways face and is why they continue to need your support.