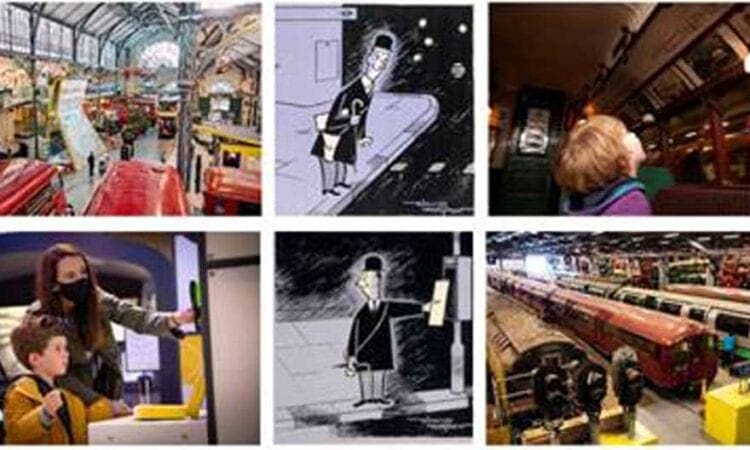 London Transport Museum is opening its doors in two locations this October half-term as it welcomes families to track down Billy Brown of London Town at its Museum in Covent Garden and its Museum Depot in Acton Town, west London.

Billy Brown became so famous as the Capital’s friendly, rhyming guide to travelling safely that he inspired a popular song of the day by Noel Gay with the lyrics, ‘Who stood up and saved the town when London Bridge was falling down? Billy Brown of London town’.

During October half-term, families visiting both the Museum in Covent Garden or the Museum Depot in Acton Town can track down Billy Brown figures amongst the historic buses and trains on display. Along the way, Billy will point out transport gems in the Museum’s collection and share some of the playful rhymes he used to encourage passengers to be on their best behaviour on public transport.

Visitors to the Museum in Covent Garden can also be among the first to explore the newly opened London Transport at War gallery which has undergone a major transformation thanks to generous funding from the DCMS Wolfson Foundation, Charles Hayward Foundation, John C Cohen Foundation and LTM Friends.

The new gallery, which opens to the public on Saturday 17 October, reveals the role London’s transport has played in global conflicts, from keeping civilians safe on the home front to supporting efforts on the front lines. It introduces visitors to the people behind these stories and features posters, photographs and objects from the Museum’s collection.

To make these important historical stories about life in wartime more accessible to visitors of all ages, including children and young people, the gallery features new interactive displays.

An atmospheric and immersive sheltering experience reveals what life was like for Londoners seeking refuge in Underground stations during wartime air raids and visitors can make their own Tube station shelter ticket.

People can also turn a bus steering wheel to learn about how many London buses went to the Western Front and use a new digital touch screen to discover the stories of women who worked for the Metropolitan Railway in the First World War.

At London Transport Museum in Covent Garden visitors can track down Billy Brown of London Town from Saturday 17 October to Sunday 1 November between 10:00 and 18:00 each day, with last entry at 17:00. Adult tickets cost £18.50 and include free return entry for a whole year. Children and young people aged 17 and under go free.

A creative activity pack designed for children aged 4 to 11 is also available to purchase in advance for £5 and pick up on arrival. This includes a craft activity to complete during your visit and fun quizzes and a transport inspired experiment to try out at home.

On Saturday 31 October between 8:30 and 10:00 a special Early Explorer session will take place at the Museum in Covent Garden for families with children with special education needs including Autism Spectrum Disorder. Families can enjoy the Museum together at a quieter time, free from the general public, and with many of the gallery sounds turned off.

Visitors to the Museum Depot in Acton Town can track down Billy Brown on Saturday 24 and 25 October and between Wednesday 28 October and Sunday 1 November. Daily opening hours will be 10:00 to 16:30, with last entry at 15:00. Adult tickets to visit the Museum Depot cost £15 and are £7.50 for children aged 4 to 17 and include entry to the venue, all activities and the special activity pack to take home. Children under 3 go free.

Timed entry slots must be booked in advance online for both the Museum and Depot.

London Transport Museum’s Depot in Acton Town is one of the only museum stores in the Capital which opens for the public to explore. A one-way self-guided route will allow visitors to discover this Aladdin’s cave of more than 320,000 transport treasures, including 70 historic buses and Tube trains, vintage signs and curious objects from bygone eras of travel in the Capital.

Visitors will be able to walk through the Museum’s beautifully restored 1938 Tube stock train and unusual green and grey Prototype Tube dating from 1986, as well as climb aboard the top deck of the Chocolate Express, a rare bus which once belonged to a ‘pirate’ bus fleet operating in the Capital in the 1920s.

The London Transport Miniature Railway will also be open for service with passengers able hop aboard replica models of vintage London Underground trains used on the Metropolitan line between the 1920s and 1960s. Tickets are purchased separately on the day using contactless payments.

Refreshments will be available to enjoy at both venues, as well as exclusive transport themed toys, games, posters and gifts from the Museum and Depot shop.

London Transport Museum and its Depot have both received Visit Britain’s ‘Good to Go’ standard and have measures in place to keep people safe during their visit. These include:

Adults and children aged 11 and over must wear a face covering when visiting both the Museum and Depot.

Tickets to visit London Transport Museum in Covent Garden or its Museum Depot in Acton Town during half-term are on sale now. Book online at www.ltmuseum.co.uk.

Local residents to both venues can enjoy discounted tickets and are encouraged to walk where possible.

Residents local to the Museum Depot in Ealing, Hounslow and Hillingdon can enjoy 1/3 off adult and child tickets.

When the coronavirus pandemic forced London Transport Museum to close in March 2020, 80 per cent of its income was cut off.

In July, the heritage charity launched an appeal and is asking its loyal visitors, supporters and the public to donate towards its future. To donate to London Transport Museum visit www.ltmuseum.co.uk/appeal.