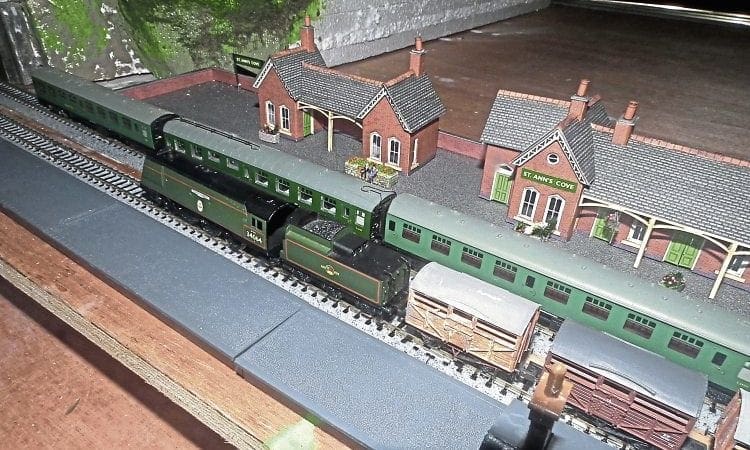 Progress with our ‘St Ann’s Cove’ project has been delayed during the past month or so because the row of old stables in which the layout is situated has been in the hands of electrical contractors doing a top-to-bottom job of rewiring the whole block, resulting in the electricity being turned off for the whole period.

That and the miserably short, cold days of late have made it all but impossible to photograph anything in the ‘model room’ – but the good news is that everything has now been completed and we can get on with it again at last.

In any case there was plenty to do at home during the long, dark evenings, and much of the time was spent scratch-building the long, narrow platform overlooking the cove.

This began by simply joining together enough basic dark grey platform sections to accommodate a typical six-coach train and then ‘dressing’ it by adding a printed card platform surface, a long back wall and two basic shelters.

These were made from leftover bits of card, old pub windows, doors and platform signage, and they are connected by an overall roof with an open waiting area between them.

The job was completed by adding ‘St Ann’s Cove’ signs, timetable and advertising displays, seats, a couple of postal trolleys, floral displays and a scattering of waiting figures and their luggage. A green and cream paint scheme has been used to give a Southern Region flavour to it all.

For the full article and to view more images, see the January 2019 edition of Modelling – available now!
For a complete list of stockists and how to get your copy, visit: www.railwaymagazinemodelling.co.uk/distributors