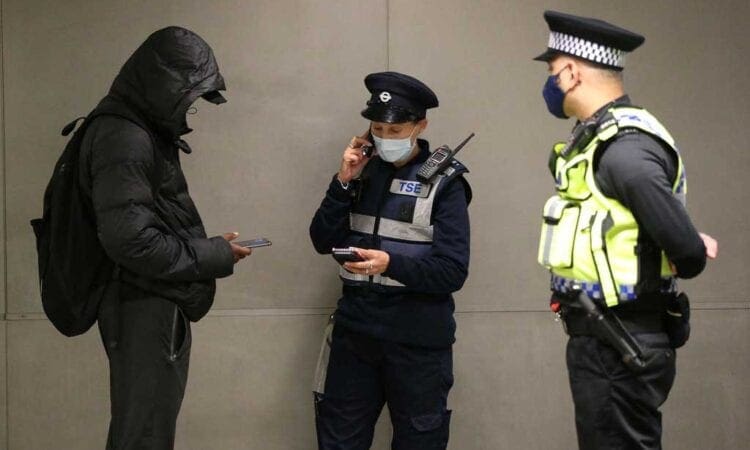 Transport for London (TfL) has defended its policy of not fining the vast majority of passengers caught without a face covering.

The organisation insisted that offenders who are let off with a warning are likely to follow the rules on their next journey.

It has been mandatory to wear a face covering on public transport in England since June 15, in a bid to tackle the spread of COVID-19.

Passengers stopped for not wearing a face covering did not face further action if they had one with them and put it on.

This included those who had already completed their London Underground journey.

One man who was not carrying a covering was issued with a fixed penalty notice of £200.

Fines double each time someone is caught, up to a maximum of £6,400.

TfL initially focused on encouraging compliance, but switched to an “enforcement phase” on July 4.

Since then, officers have carried out 105,000 interventions, with 7,600 people stopped from boarding a train or bus, and 1,800 passengers removed from a service.

TfL’s director of compliance, policing operations and security Siwan Hayward told the PA news agency that around 400 fines have been issued by the transport body to passengers who “absolutely refuse to comply with the requirement”.

“If someone has a face covering with them then what we find is being reminded, being engaged with by our officers, means they will then next time wear a face covering the whole time for the entirety of their journey.”

She added that around 90% of passengers are complying with the rules at peak times.

BTP assistant chief constable Sean O’Callaghan said: “We are pleased to report that compliance with this law has been high across the Tube and rail network.

“However, a small percentage of people are failing to comply with the requirement.

“We therefore continue to deploy officers across the network to ensure compliance rates remain high on board trains and in stations.

“Anyone who fails to comply without an exemption is being removed from the network and in some cases where appropriate issued with a fixed penalty notice.”

Earlier this week Boris Johnson’s father admitted he “slipped up” after being photographed again breaching rules on wearing masks.

After the photograph was published, showing him at a Bakerloo line Tube station with his mask under his nose, Stanley Johnson insisted he was unaware the rules also applied when standing on a platform.

He recently attracted criticism after being pictured without a mask in a shop, despite his son’s Government imposing a law requiring their use.