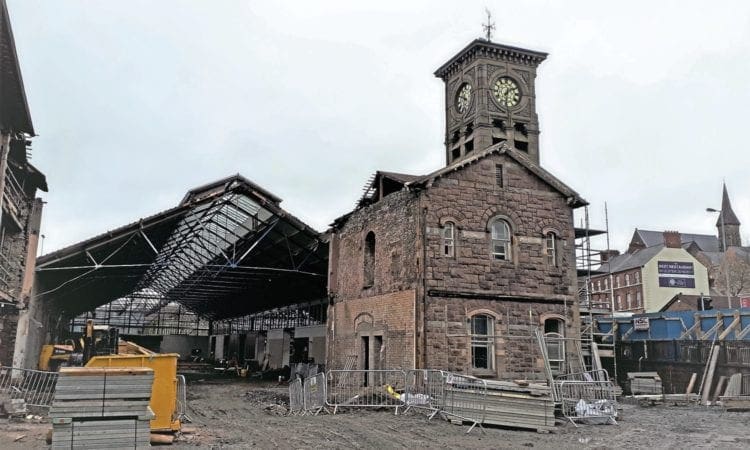 Translink’s £27million redevelopment of the old Waterside station in Derry/Londonderry has made good progress, six months after work began on transforming it into the new North-West Multi-Modal Transport Hub.

When finished the controversial cross-border project will provide an important gateway to the region, helping to further regenerate the local area and encourage a modal shift from car to public transport.

At its heart is the former Waterside station building, closed in 1980, around which a new park and ride will be built together with a new bus turning circle, footpath links to the city centre via the Peace Bridge, and enhanced facilities for rail users.

Phase 1 of the scheme, including the reopening of the Grade B-listed station building, is on target for completion this autumn.

The 1980s’-era alterations at the front of the building have been removed and the west elevation roof is nearing completion.

John Glass, Translink’s director of infrastructure and projects, said: “Since the introduction of the hourly service from Derry/Londonderry to Belfast in 2017, we have witnessed a substantial growth in passenger numbers on the line travelling to and from the city. We are confident that the North-West Transport Hub will build on this success.”

Associated track and signalling improvements resulted in a full line closure during the weekend of March 29-April 1, which will be followed by two consecutive weekends in June and a 12 day closure in mid-October.

A programme of night works will have an impact on the last train at night, arriving in the city at 23.22 Monday to Saturday and 21.22 on Sundays, as well as the 06.12 departure Monday to Friday, 06.38 on Saturdays and 09.38 on Sundays. Replacement buses will be provided for these services.