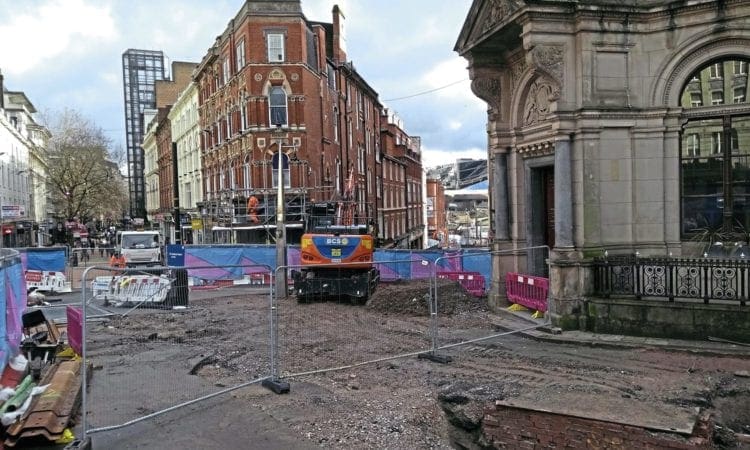 Tram tracks are now being laid in Birmingham city centre on the extension from Grand Central (New Street station) to Centenary Square.

The first rails were ceremonially laid by Mayor of the West Midlands Andy Street and Transport Minister Jesse Norman alongside the Town Hall in Victoria Square on February 7.

They are the first trams tracks to be installed in the city centre since 2015, for the extension from Snow Hill to Grand Central, which opened in May 2016.

The tracks form part of the first phase of the West Midlands Metro Westside extension, which is due to open to Centenary Square at the end of the year.

The second phase of works will then take the line along Broad Street to Edgbaston Five Ways, with this due to be completed by the end of 2021.

The new line will serve a number of tourist and commuters destinations, such as the Birmingham Museum & Art Gallery, the new HSBC headquarters, the Arena Central and Paradise regeneration sites, Brindleyplace, Symphony Hall and the Town Hall.

It is part of a wider £1.35billion expansion of the region’s tram network over the next decade that will also include new lines to the Black Country and Solihull.

Birmingham Mayor Andy Street said: “This is just the start of a revolution in public transport with huge investment in new rail, tram, rapid bus, services and cycling planned over the next few years.”