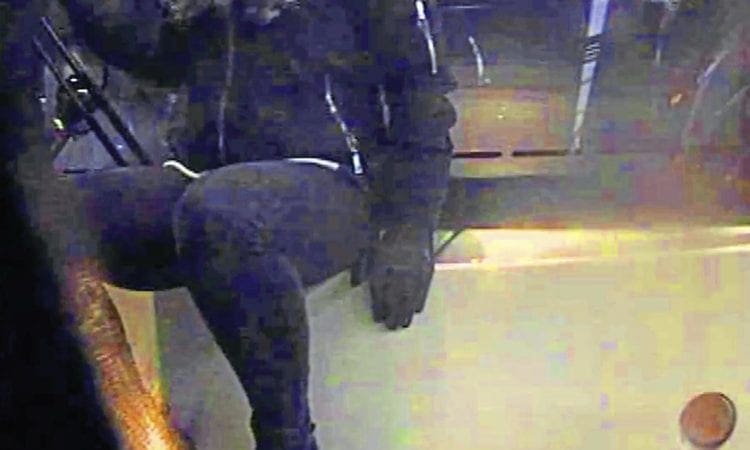 They want to draw attention to this dangerous activity amid concerns it may be on the increase.

Since June 2018, there have been 63 recorded incidents of ‘tram-surfing’ across Greater Manchester, with many involving children, who in some cases could be as young as 11 years old.

Concern was also expressed over the fact some of these incidents have been recorded and distributed on social media, which may be serving as some sort of encouragement to others.

The footage shows two young people riding the tram at speed on the Altrincham line in November last year.

The pair were on the unit for about 10 minutes in total, and the pictures show them moving around while the tram was moving, using the windscreen wipers to stop themselves falling off and then sitting on the vehicle end on a small ledge below the driver’s windscreen.

TfGM issued a reminder that ‘tram-surfers’ run the very real risk of death or serious injury through this activity.

There have been no fatalities on Metrolink yet, but there have been some serious, life-changing incidents. There is a feeling it may only be a matter of time before a fatality occurs, particularly as many of these ‘surfers’ have targeted the central coupling between two trams, which means if they do lose their grip they will fall under the second unit rather than merely onto the track.

The area between a couple pair of trams is also not covered by the drivers’ CCTV so the culprits can go unnoticed unless the driver is alerted to their presence by other passengers or, on the street running sections, by pedestrians.

Health and safety manager at operator KeolisAmey Metrolink Carole Mason said: “We are looking at whether there is some kind of cover we can fit to stop this happening but it is difficult.

“Meanwhile we are saying ‘don’t do it’. I’ve seen the consequences and it’s really not nice.”