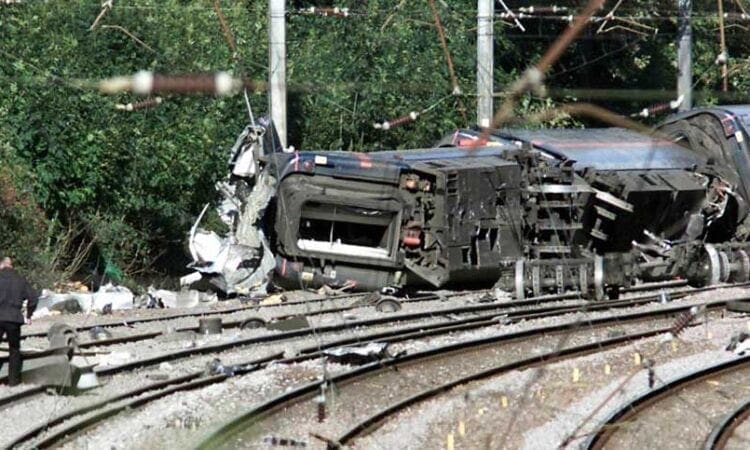 Survivors of the Hatfield rail crash will join those bereaved by the tragedy to mark its 20th anniversary.

The four passengers killed when an express train derailed on October 17, 2000 will be remembered in a service at St Etheldreda’s Church in the Hertfordshire town.

Capacity at the annual gathering will be limited to 30 people due to COVID-19 restrictions.

The Hatfield crash was among a spate of fatal accidents on Britain’s railways, but the network’s safety record has vastly improved since that period.

Father Collins said the victims’ families are “reassured that something positive came out of one of the saddest occasions of their lives”.

He went on: “Lessons were learned and the railways became safer. They all wish that they’d never lost their loved ones. It’s still hard for them.”

After the service, attendees usually visit a memorial garden overlooking the scene of the accident near Hatfield station to lay flowers and pay their respects as a group.

This year they are encouraged to go to the site individually, to enable social distancing.

Raymond Donnachie, 64, was working on the train when it crashed. He was in the restaurant carriage, where the four victims died. This year will be the first time he will not attend the annual remembrance service, due to the pandemic.

On Saturday he will say a prayer and hold a minute’s silence at his home in Leeds.

His main memory of the crash is crawling out of the restaurant carriage and “seeing such a wreck”.

He said: “We had no idea what had happened. The roof was completely ripped off it. Originally, myself and the chef thought it was a bomb blast. We got the crew out. They were quite shocked and didn’t want to hang about.

“I called back into the carriage where the four trapped people were and stayed there until the emergency services turned up.”

The train, travelling at more than 100mph, derailed after passing over a section of track which then fractured.

12 GNER staff and 170 passengers were on the Intercity 225 service. As well as the deaths, there were 70 injuries.

A phenomenon known as gauge corner cracking, or rolling contact fatigue, was blamed for the crash.

Network Rail’s predecessor company, Railtrack, introduced hundreds of speed restrictions on the railways while tracks were checked for cracking.

Official inquiries into the derailment showed that, north of the crash position, the rail had fractured into more than 300 pieces.

A Health and Safety Executive inquiry report said the train had passed over a section of track which was in a poor condition and which should have either have been replaced or a temporary speed restriction should have been brought in.