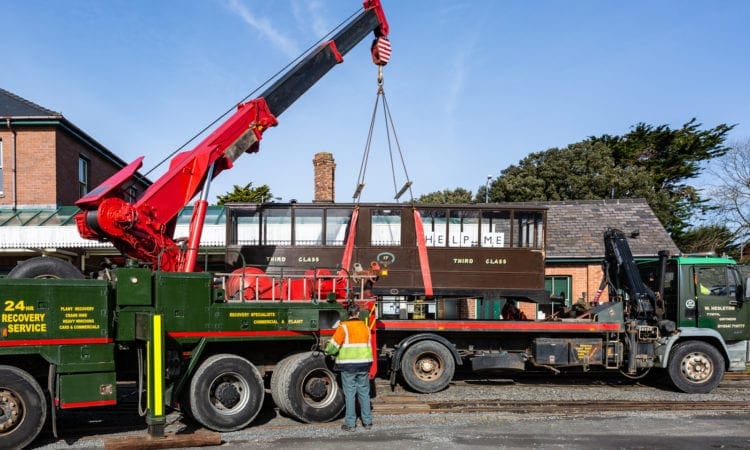 Passenger numbers on the Talyllyn Railway over the February half-term period were 50% up on the previous year, according to the latest figures from the railway.

The numbers continue the trend during 2018 which saw passenger numbers increase by 9% over the previous year.

During the winter there has been other progress as well: volunteers and staff have been hard at work relaying much of the track between Abergynolwyn and Nant Gwernol, which necessitated the closure of that section of the line while the work took place. In total, 40 lengths of track were replaced over five months.

Carriages have also been receiving attention. The body of ex-Corris Railway carriage No. 17 was moved from the railway to a unit which has been leased on a nearby industrial estate. An appeal fund for restoration has now raised more than £16,500 of the £20,000 target in just over seven months.

Work is also starting on the restoration of ex-Corris Railway brakevan No. 6. This is being done with the assistance of some of the apprentices studying at the Dolgellau campus of Coleg Meirion-Dwyfor. They will be rebuilding the van body, while work on the underframe will be undertaken at Pendre works.

Back in the railway’s paint shop carriage No. 18 has been repainted, and work is being carried out on a number of other coaches ready for the main season.

On the marketing front a new ‘app’ is now available for download for mobile phones. It has several features and allows users to access the timetable to see what trains are running on a given day.

In addition, when they visit the railway a host of additional information is available as they travel the line, including some of its history and points of interest, to enhance passengers’ experience. There’s even a treasure hunt for children. The app can be downloaded from: www.talyllyn.co.uk/treasure-hunt.

Chairman of the Talyllyn Railway Preservation Society Ian Drummond said: “All through the winter our staff and volunteers have been hard at work on those tasks which maintain our locomotives, rolling stock and infrastructure, as well as enhancing the experience of passengers. Much of it is unseen but invaluable.

“The railway is a year round operation even when passenger trains aren’t running, and we thank everyone involved for their dedication and enthusiasm.  “We are now running trains daily until November 3, and we look forward to welcoming many more visitors this year.”