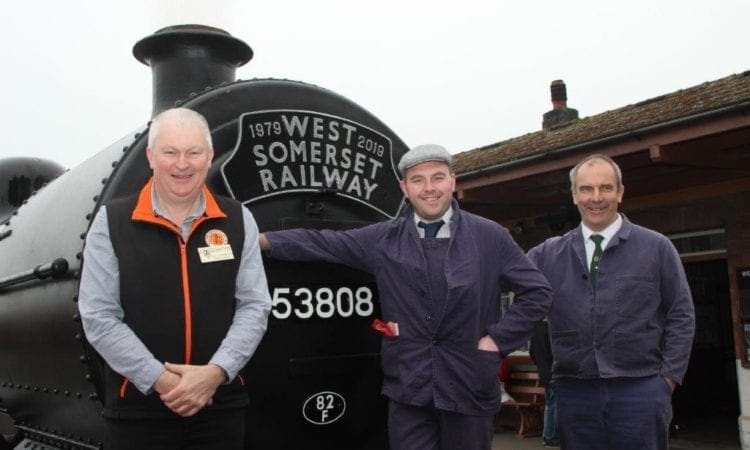 The day the West Somerset Railway (WSR) re-opened after a three-month closure following its rescue from the brink of collapse (HR2520) was like a collection of outtakes from the classic 1950s Ealing comedy film, The Titfield Thunderbolt.

With smiles all-round at Bishops Lydeard, there were repeated calls of celebration from staff, volunteers and well-wishers of ‘We’ve done it!’ There was even a clergyman present – the train guard – who said he’d prayed for this day.

Overbridges, station platforms and level crossings amassed a collection of beaming smiles and waving hands as camera shutters fired away. Road workers repairing the A358 near Williton even blew the horns of their machinery as the train crossed the bridge.

Upon arrival at Watchet however, the scene was carnival-like. Joyous crowds on the platform were supported by the town cryer and mayor as car horns tooted in the car park in front of the station and more arms waved from the steps of the Methodist church.

There was even a classic Bedford OB bus next to the old goods shed – although rather than competing with the ‘revived’ railway as in the Titfield Thunderbolt, it was operating a ‘rail replacement’ service to Minehead.

With no run around facility at the coastal station, the ‘Crompton’ diesel hauled the train back from Watchet to Bishops Lydeard.

Although all of the infrastructure works are well advanced, some unforeseen problems were found with the track around Blue Anchor, including having to order a replacement point. Services to Minehead are due to resume on Good Friday, April 19.

# Read the full story in Heritage Railway issue No. 243, published on April 12.