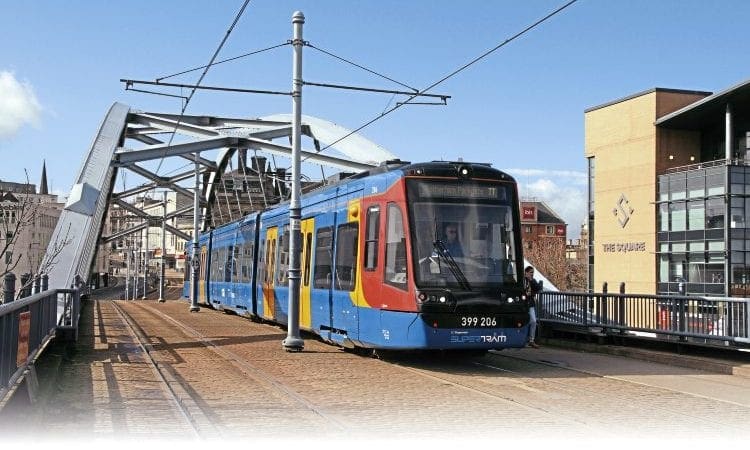 For this month’s Practice & Performance, John Heaton FCILT takes a look at Britain’s first tram-train operation in Sheffield, which runs from the city centre to Parkgate, Rotherham, using a mix of tram and rail tracks.

A RIBBON of rails bisects Sheffield’s inner-city industrial twilight zone. Satanic forges hulk over the railway on one side of the tracks, with anodyne, possibly ephemeral, warehouses squatting on the other. A sleek electric-powered vehicle hums away from a low level passenger platform, uniting old and new, work and leisure, city and suburb. This is Sheffield Supertram.

Urban city transport has changed emphasis a number of times in the last 120 years, and it is once again the turn of rail using trams, trains and now a hybrid – ‘tram-trains’. Technology can link the ability of trams to negotiate city centre roadways and closely spaced stops with the traditional strengths of rail in covering longer distances at high speed, safety enhanced by full signalling systems.

Way back in 2009 (RM Oct) I criticised the plans to impose tram-trains on the Huddersfield to Sheffield line via Penistone and Barnsley. To summarise, my objections were on the grounds the trains would fail to offer improved frequencies, electric traction, on-street running, similar capacity, or toilets. And that was just for starters.

The capital costs, that included providing low level platforms at every station, were stupendous for an experiment to investigate little more than the possibility of adopting a technology the principles of which had already been established in Stuttgart and Karlsruhe.

When the normally eager press office mouthpieces of the Department for Transport, Network Rail and Northern Rail suddenly fell silent on timescales, it was evident the trial was in trouble. It took another nine years and a treasury-full of money to put the project back on…well…track by extending the Sheffield Supertram network out to Rotherham Central and Parkgate via a new curve from the tramway to railway infrastructure at Tinsley North Jct. The experiment will be evaluated after two years, but tram-trains will continue to operate for at least a further three.