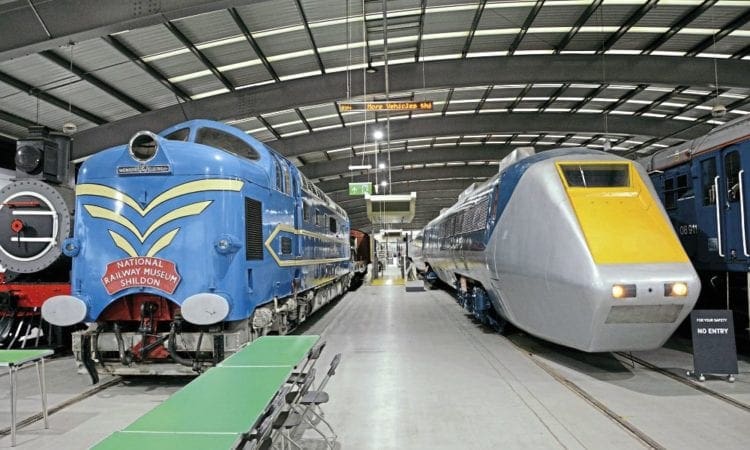 With some £4 million spent on the decade-long restoration of steam loco Flying Scotsman, there were some that took this as a sign that the National Railway Museum had little interest in its diesels and electrics.

With the likes of pioneer Class 40 No. D200 and celebrity ‘Western’ No. D1023 gathering dust at York, critics said the museum did not care. All is not quite as it seems, however, and just because nothing appears to be happening does not necessarily mean nothing is actually happening. As the museum’s senior curator of rail transport and technology, Anthony Coulls, puts it: “One reason why a loco may not be operating at the moment is that we do care about it!”

The museum – which is still officially the National Railway Museum as part of the wider Science Museum Group, the recent dropping of the word ‘national’ being only for branding and signage purposes – is home to a unique collection of locos, units, carriages, wagons and related items.

Some of these, like Nos. D6700 and D9002, are currently operational and the idea of seeing others at work again is seductive. “Working locos would be nice,” says Anthony, “but the NRM are custodians and responsible to the Science Museum trustees.” Not only is the museum duty-bound to look after its collection for the future, but working locos require a team of people to look after them while they are running. “We have enough volunteers for two or three working locos, but many more would not be possible.”

Another factor is that the NRM has around 750,000 visitors a year, of which only 5% can be classed as enthusiasts, so arguably York is the best place for people to be able to see and learn about the collection, rather than have its items scattered across the country.

“Operation is the best form of interpretation,” says Anthony, “but the trick is that it has to be done well, be appropriate, and cost effective.”

Take pioneer Class 40 No. D200, for example, which has its place in history as the first of the ‘big’ fleet diesels ordered for the modernisation of British Railways in the 1950s. There are many that would like to see it running again, not least after its recent appearance at the East Lancashire Railway’s ‘40s at 60’ gala as a static exhibit alongside five working classmates.

The ‘40’ is widely known to have an issue with its main generator bearing, but is generally in good condition apart from that, and the work to put it right is not beyond the capability of certain preservation groups. As Anthony puts it, however, “Do we need another working ‘40’? Is there a business case?”

The temporary move of No. D200 shows that locos and units are not always tied to the museum and can go out on loan. In fact, there are a number of working and non-working vehicles in the National Collection currently out on loan around the country. These include No. D6535 (33116) at the Great Central Railway and the Class 101 DMU at the North Norfolk Railway.

The NRM operates three types of loan agreement: static, restoration/overhaul and operational. Anything loaned for operational use comes with certain caveats, not least – as an object in the National Collection – that it should retain its special nature and not just be used as an everyday ‘wheelbarrow’. The agreement also needs to be advantageous to the NRM, such as generating publicity and income.

A great example of this is the deal with the 125 Group for HST power car No. 41001. This prototype arrived at the NRM in 1985 after being out of use for a number of years, its final role having been for research purposes at the RTC in Derby.

The original idea had been to section the power car, in a similar way to steam loco No. 35029 Ellerman Lines, to show the inner workings of a diesel loco. Luckily, only the Valenta engine was ever sectioned, and the power car went on static display until 2010, when the museum was approached by the 125 Group with the idea of returning it to working order.

Under the working name ‘Project Miller’, the group took the power car to Neville Hill depot, Leeds, to overhaul the remaining parts and refit those that were missing – not least an original Valenta engine and associated electronic systems – before moving it to Ruddington on the Great Central Railway (Nottingham). There it hauled its first train for around 30 years in 2014, and has put in a faultless performance since then on diesel running days at the GCR(N) and at diesel galas on other heritage lines around the country.

“The HST deal has gone very well from the NRM’s point of view,” says Anthony, “and the loan period could be extended.” There has been a similar arrangement with the Class 101 DMU at the North Norfolk Railway, which has seen them invest money that the museum could not.

The main focus at the museum now is a major review of its vehicles to determine exactly what condition they are in and what work needs to be done to them. This applies to vehicles at York and Shildon, as well as those that are out on loan.

The review will lead to a conservation management plan for each, and set out the value of the vehicle in a historical context. It will also help the museum decide how to proceed, whether the loco or unit will be for display, partial use, or full use. This plan will not be set in stone, however, as something deemed an exhibition piece today will not necessarily be ruled out of being
made operational again in the future.

One downside of the review is that work on all vehicles has been suspended for the time being – which, frustratingly for some, has included Class 20 No. D8000 and main line ‘Deltic’ No. 55002.
It has also led to some objects leaving the collection, notably including a steam loco and the Class 502 EMU. This followed from finding the items were no longer required, for reasons such as being duplicates or – in the case of the ‘502’ – being too far beyond repair.

The ambition of the museum is to have complete exhibits in good condition. As Anthony puts it: “If something’s not complete, why would we have it in the collection?” An example is ‘Western’ No. D1023, which is already known to have a transmission fault that means it can only be moved at low speed, even within the museum. “This needs rectifying whether it’s to work again or not.”

Money has already been spent on the non-steam collection, however. ‘Deltic’ No. 55002 benefited from a significant cosmetic restoration for its role in the ‘Flying Scotsman’ exhibition in 2016; while 2-HAP electric unit No. 4308, which is the furthest travelled vehicle in the museum’s collection, has had the most money spent on it after No. 4472 Flying Scotsman.

Other examples include prototype railbus LEV1, currently stored at the Wensleydale Railway awaiting parts. The museum has the parts at York and the work will get done, underlying the idea that just because something is left in a siding does not mean nothing is happening to it.

The LNER-designed Class 306 EMU is an often-cited example of something being ‘neglected’ in the National Collection. This unit has been at the East Anglian Railway Museum in Essex since 2011, where it has suffered from being left outside in all weathers. But it has not been forgotten. “Its place was always in the collection, so it needs to be here [at York],” says Anthony.

The first step will be to move it to Shildon, where it can be treated for pests and protected by covers donated by Hitachi Rail Europe, which were used for bodyshells shipped from Japan as part of the IET delivery programme.

Telling the story of railways is not just about locos, of course, but also carriages, wagons and associated items. Freightliner has recently restored the NRM’s 1960s guard’s ‘caboose’, while a recent acquisition at Locomotion Shildon is HSFV1, the four-wheel testbed that led to the development of modern high-speed freight wagons, as well as being the basis of the Class 140 ‘Pacers’. “HSFV1 is the Rocket of the modern era,” says Anthony. “It has limited heritage railway appeal, but huge historical interest.”

Wagons is one area where the museum comes into its own, as it has saved important items that no one else would. It has a hit-list for future items too – taking in locos, units, carriages and wagons – and there are regular meetings with the Railway Heritage Designation Advisory Board to discuss acquisitions.

New additions to the collection are often thorny matters, as not everything can be saved, so the question is what is deemed important enough to be saved as part of the story of railways. Issues being grappled with at the moment include which of the second generation EMUs should be designated, while the third generation Class 165 DMU and Class 365 EMU share the same bodyshell, so which has more value?

Those that make the RHDAB’s designated list are not necessarily bound for the NRM. Designation for railway items is like giving a building listed status, as it deems them of significant historical interest, but does not say who should own them. A classic example of this is Class 58 No. 58050, which has been designated for saving as the final locomotive built at Doncaster Works, but is currently marooned in Spain after being sent there in 2008 to work on high-speed line construction. The museum is often asked why is it not doing something about this loco? Anthony says: “The question is not there to be answered – the loco is not available yet and so it’s not ours to do anything about!”

Overall, the museum’s goal is to tell the story of railways, and there is a lot of it with only a finite budget to spend. Railway history stretches back more than 200 years before the opening of the Stockton & Darlington Railway in 1825, and there has been nearly 200 years since then too.