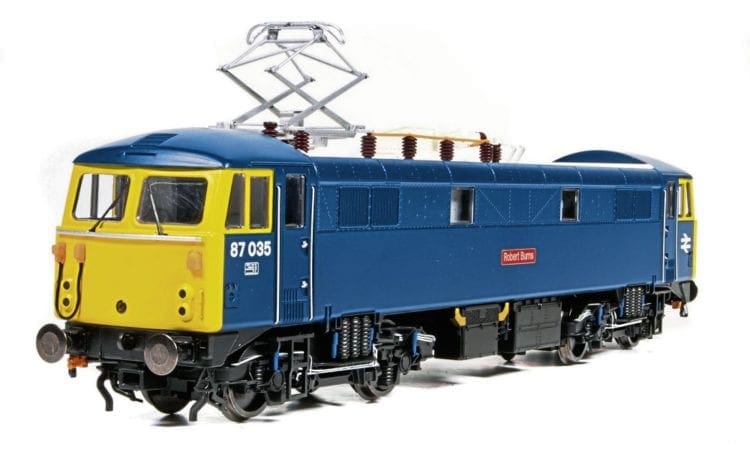 Hornby’s ‘OO’ gauge Class 87 model is now available in the shops, including an original BR blue version of the 1970 and early 1980s, writes Nigel Burkin.

Introduced in 1973 for the completion of the last stage of West Coast Main Line electrification linking Weaver Junction with the greater Glasgow area suburban network, the Class 87 became the main traction for long-distance workings from London Euston, particularly after formation of the InterCity sector. Mk.2f air-conditioned locomotive-hauled coaches were coming on stream, and the longer Mk.3a was not far behind, modernising trains used on Anglo-Scottish passenger services.

A total of 36 5000hp Class 87s were built at BREL Crewe Works as a development of the successful Class 86 (AL6) with electrical equipment manufactured by GEC. One locomotive was delivered as a test locomotive with ‘Thyristor’ control instead of tap changer control and rectifiers. It was classified as Class 87/1 and numbered 87 101 to identify it from the remainder of the fleet.

They were powerful mixed-traffic locomotives designed to cope with the steep gradients on the northern section of the WCML. Multiple working equipment was provided, and although Class 87s spent most of their time working daytime expresses, they also found employment working in pairs on heavy night-time freight together with Anglo-Scottish night trains such as sleeper services, until sectorisation saw them dedicated to InterCity services.

The Class 87s soon became popular with enthusiasts, particularly after naming began in 1976. No. 87 001 was the first to receive nameplates, to commemorate George Stephenson and coinciding with the 150th anniversary of the opening of the Stockton & Darlington Railway. The plates were simply lettered Stephenson, but were the start of a scheme to name all Class 87 locomotives.

Eventually, No. 87 001 was renamed Royal Scot given that the Class 87 had become the 25Kv AC version of that famous class. The Stephenson nameplates were transferred to No. 87101, where they remained until the locomotive was withdrawn from service. Class 87s served the WCML well, lasting into privatisation under the Virgin Trains West Coast operation, where they found themselves displaced by the introduction of Class 390 ‘Pendolinos’. Many of the names were retained until final withdrawal, by which time they shared duties with Class 90s, a development from the ‘Thyristor’-controlled Class 87/1 No. 87101 which ended its operational career as a freight locomotive.

Today, the Class 87 is rarely seen on the BR network with No. 87002 being the only regularly used member of the class in the last few years. It finds employment on charter trains and for stock movements on behalf of Caledonian Sleepers. Most of the fleet was due to be exported to Bulgaria when a downturn in traffic saw the export contract curtailed, leaving numerous Class 87s without work and resulting in many being scrapped. A total of 21 Class 87s were exported between 2008 and 2012.

Two Class 87s are currently preserved, including No. 87 001 which was secured for the National Collection in 2005 and No. 87002, which is owned by the AC Locomotive Group. Although sought for preservation, the unique Class 87/1 was controversially scrapped at Barrow Hill in 2002. Hornby’s Class 87 model came as a surprise to many modellers when first announced, and attracted comment regarding the need for further development of easy-to-use overhead line equipment (OHLE) systems such as the Dapol or Peco models.

The model effectively replaces the ageing Lima model with a high-fidelity product that has all the character of the full-size locomotives. The review model represents the class in as-built or 1970s and early 1980s condition, finished in BR blue livery as No. 87 035 Robert Burns, and equipped with the original cross-arm pantograph.

Not only is the body shell of the correct length and proportions, but it is also an example of how well Hornby can tool fine detail into its models, as demonstrated by the grilles and fine bolt head detail along the upper side of the body shell. It has succeeded in capturing the subtle curve to the cab front, and the two front cab windows are of the correct shape and size. If anything can be said, the distinctive cab front window frames are so fine that they do not appear as prominent as on a real Class 87.

Examining the model further alongside reference photographs and drawings, it’s clear that Hornby has definitely got under the skin of this one, with the recessed central roof detail modelled to a high standard, and the complex shape of the cab roof dome appears to be well modelled.

The featured model (R3580) is detailed with features specific to the 1970s and 1980s era, including the original multiple working equipment, round headlights and cross-arm pantograph, which were subsequently replaced by Brecknell Willis high-speed pantographs.

Below solebar level, AC electric locomotives are complex machines, particularly those fitted with ‘flexi-coil’ secondary suspension springs between the bogies and underframe, which is the case with the Class 87. Both the spring detail and underframe boxes are fine mouldings, with the springs appearing fully circular and with good depth of relief. Underframe boxes are all crisply-moulded details, particularly the curled pipe component which is protected by a very fine etched guard. The appearance of depth to this area of the model has been achieved, even allowing for the larger tank moulding which has been adapted to conceal the lighting switch.

The opportunity was taken to test the model on an extensive HO layout with 16.5mm track and a long continuous 2% incline. Its heavy die-cast chassis, combined with four-axle drive and powerful frame-mounted five-pole skew wound motor, saw it handle the equivalent of nine Mk3 coaches (Norsk Modelljernbane NSB B7 stock) with ease, and with smooth performance both running uphill and back to the staging yard, and with a starting point so smooth that it did not snatch at the couplings. Based on this testing, the model is capable of propelling a scale-length WCML train of Hornby Mk 3 coaches and DVT on level track without any trouble at all.

Current collection is through fine wiper pick-ups hidden behind each wheel, resulting in reliable operation of the model. Its length plus long bogie wheelbase ensures that stalling over turnouts is unlikely. Internally, an eight-pin DCC interface is fitted alongside running lights illuminated with LEDs which are bright but do not cause any light leakage into the cab. Changing over from day to night-time running lights is supposed to be through a switch in the base of the underframe, but it did not control the lighting as one might expect. With the advent of PLuX22 decoder interfaces with additional poles for lighting and sound functions, the use of an eight-pin interface socket in a model with complex lighting is out-dated and Hornby could consider a change in the circuits to incorporate PLuX22 for control of all lighting functions through a decoder.

When it comes to fine detailing, Hornby has excelled with this model, particularly in the area of the underframe, the cab interior and the roof section. The individual mouldings are crisp, without moulding flash and supported with wire or etched details. The pantograph is fine in appearance, but robust too, and it is fitted with a light spring allowing it to be used with OHLE systems. Particularly commendable points include the clear flush glazing, an impression of the equipment room interior through the side windows and a host of small details applied to the bogies.

An accurate shade of rail blue is applied to the model, with pre-1987 warning panel to the cab fronts. Both colours are smooth, opaque and cover raised detail well with no bridging over recessed detail. To the lowered roof section is applied a pale cream colour, while small details are picked out in appropriate colours, such as brown to the insulators and orange to the bus bar. Details are appropriately coloured on the body, within the cab and on the underframe, with orange used on electrical jumper cable connectors and electrical conduit and white to pipe runs on the bogies. Small details are sharply printed, including nameplates, TOPS numbers and data panels.

One small detail anomaly of note is that the circuit breaker on the roof is modelled in the open position, meaning that the roof circuit is not complete, cosmetically speaking! It may be rectified by the modeller if required. Apart from that and the limited lighting function control when used with a decoder, the model is a lovely replica of a once-common electric locomotive, and one that is missed by those who follow electric traction.

It’s a fine addition to the Hornby range, and is sure to increase the call for an OHLE system which can be used to cover more than plain running line and simple junctions.