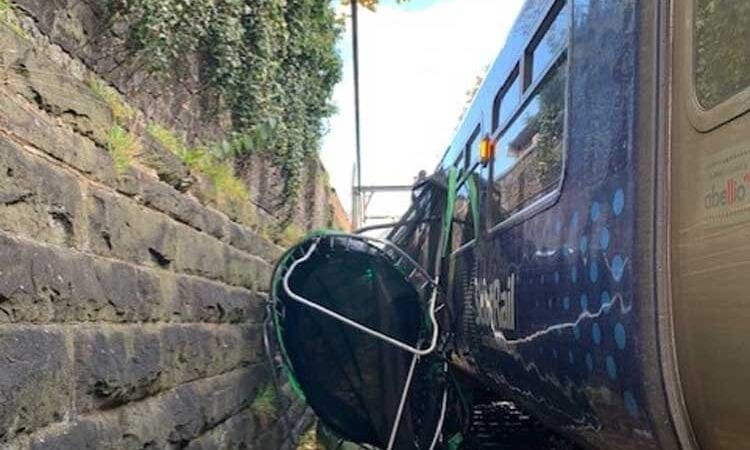 A trampoline has been caught between a train and an embankment in Glasgow as Storm Aiden battered Scotland with rain and high winds.

Yellow weather warnings for rain are in place until 7pm on Saturday across the UK with wind speeds expected to reach highs of 70-75mph on the west coast and islands of Scotland.

The winds caused the trampoline to fall on to the line at Queens Park, one of many in and out of Glasgow Central, at around 1.20pm.

ScotRail said on Twitter: “A trampoline is caught between a train and an embankment at Queens Park. Colleagues from @NetworkRailSCOT are on site.

A further tweet accompanied with a picture of the “offending object” added: “We’ll need to suspend services temporarily while @NetworkRailSCOT colleagues remove the trampoline from the railway line.”

However it was not the end of weather woes on the rail lines with services delayed across the country and some trains cancelled between Helensburgh and Airdrie and Inverness and Wick.

Replacement bus services were introduced from Kilwinning with services between Glasgow Central and Largs/Ardrossan Harbour being terminated there due to high waves at Saltcoats.

Elsewhere on the roads, the A83 and the Old Military Road (OMR) at the Rest and Be Thankful will remain closed for the rest of Saturday because of “significant rainfall”.

An estimated 53mm of rain had already fallen at the Rest and Be Thankful from Friday night to Saturday afternoon with two landslides caught in debris nets.

Eddie Ross, BEAR Scotland’s north-west representative, said: “Motorists are being diverted via the usual standard diversion route on the A83, A82, A85 and A819.

“We also have our incident response teams available to deal with any flooding issues on the diversion route, as well as gully tankers and pumps on standby to help ensure the route is kept clear.

“Since the closure this morning, two landslides have occurred above the A83 which have predominantly been caught in the debris nets although the events are continuing.

“Excess water has also washed material on to a section of the Old Military Road.

“This is an on-going situation which we will continue to monitor today – with poor weather set to continue overnight we will reassess the situation at mid-day on Sunday.

“Both the A83 and OMR will remain closed in the meantime.”