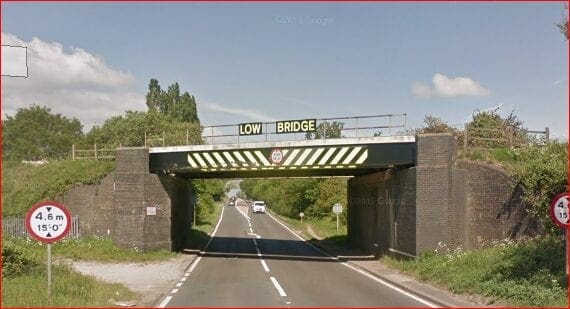 A 15ft high railway bridge across one of Britain’s main trunk roads has been revealed by Network Rail as the structure most hit by HGVs.

The bridge spanning Watling Street on the Leicestershire-Warwickshire border on the A5 at Hinckley has been hit 25 times in the past year, figures reveal. The line carries rail traffic between Leicester and Birmingham and is part of a major freight route for intermodal traffic from Felixstowe to the West Midlands.

In a feature in the April 2017 issue, Railway Magazine editor Chris Milner looked at how ‘bridge bashing’ was on the increase, and at that time the Hinckley bridge was lying in eight equal place with just eight strikes.

Chris, who lives in Leicestershire just a few miles from the bridge, believes part of the reason for the rise in numbers stems from the proliferation of warehouse complexes along the A5 corridor from Crick near Rugby to Tamworth.

He said: “Over the past five years, there have been large extensions to existing warehousing at Birch Coppice (Tamworth), Magna Park (Lutterworth), and the Daventry International Rail Freight Terminal near Rugby, as well as two new sites north of Rugby.  In addition, a large international parcels carrier is building a second massive hub next to the A5 by the M69 at Hinckley, and I don’t believe the increase in the number of times the bridge has been is coincidental.”

“The A5 is a major artery for the area, however, the road has a greater demand when there is an incident which closes the nearby M6. But despite the number of hits, as a local resident, I am disappointed at the lack of collective action from the Department for Transport, Highways England, Leicestershire and Warwickshire Councils in finding a resolution to upgrade the road from Tamworth to Crick to dual carriageway throughout with bridges which won’t get hit.”

The second most-struck bridge, the Bromford Road bridge in Dudley, West Midlands, saw the most rail passenger delays attributed to bridge strikes with a staggering 4,300 minutes -almost 72 hours- of disruption from 24 bridge strikes.

The problem is one which blights people across Britain, with bridges in Norfolk, Scotland, Middlesex, Wiltshire, Cambridgeshire, Staffordshire, Hertfordshire, London, Somerset, West Midlands and Lancashire all making the most-struck list.

Although there has been a 11% decrease in incidents in the last financial year (April 1 2019 – March 31 2020), bridge strikes remain a dangerous and costly concern.