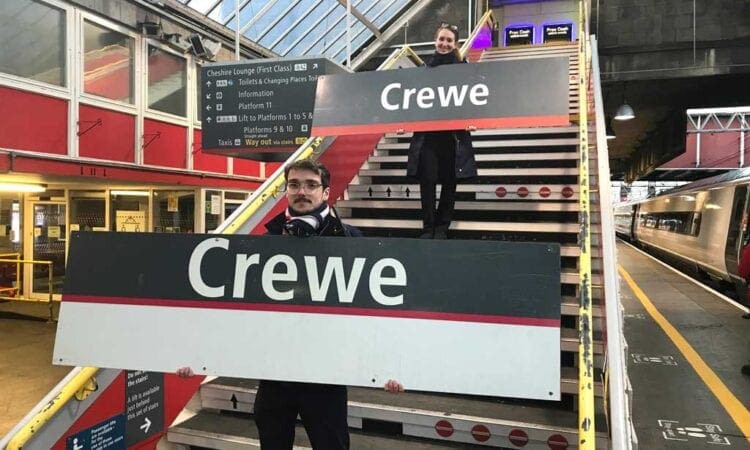 Avanti West Coast is offering enthusiasts the chance to get their hands on some eagerly sought after railway artefacts to help raise money for Rail Aid.

A number of signs from Crewe station are up for grabs, the proceeds of the auction going to Rail Aid, the Railway Children’s week long fundraising initiative taking place later this month.

The large station signs, measuring 1.98m x 56cm, come in two designs and were taken down earlier in 2020 after many years use at a station familiar to so many rail travellers.

Rail Aid is a new fundraising mission led by charity Railway Children, bringing the best of the UK rail community together to raise money and help vulnerable children whose lives have been impacted by coronavirus.

“The signs have helped welcome so many customers over the years, so we really wanted to find them good homes,” said Karen Grimshaw, Station Manager for Avanti West Coast at Crewe. “And if we can raise some money for such a fantastic cause at the same time, even better.”

Across the rail industry, individuals and businesses will be taking part in a week of activities starting from November 22 to November 27, culminating in a live online show, celebrating achievements, featuring some of the key figures in rail and showcasing the industry at its very best.

Terina Keene, Chief Executive, Railway Children, said: “So many people have been hit hard by the effects of Covid-19 and that means children, both in the UK and overseas, are even more vulnerable to finding themselves on the street and in need of our support.

“The railway family has played such a key role during a time of national emergency and we really appreciate the support of Avanti West Coast.”

Anyone interested in bidding for one of the signs should email richard.stanton@avantiwestcoast.co.uk , including their details and confirmation of their bid. The signs are expected to fetch in the region of £100 each.

The auction closes at midnight on Saturday 21st November. Winning bidders will be notified the following Monday, with all proceeds going to Rail Aid. Collection will be from Crewe station.