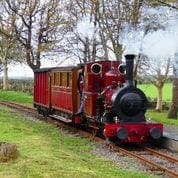 In the Autumn of 1950 the future of the Talyllyn Railway was very much in doubt.

Unusual in being a public railway in the ownership of a single individual it had been kept going by its owner, Sir Henry Haydn Jones, who had bought it in 1911. The quarry it served, also owned by Sir Haydn, had closed in 1946. Sir Haydn, now in his eighties had said he would keep it running as long as he lived and had funded it out of his own pocket.

It was in a very dilapidated condition and when Sir Haydn died in July 1950 the railway seemed likely to follow. His widow, Lady Haydn, kept the passenger service running till the end of the summer season; the final train, with Dolgoch, one carriage and the brake van ran on October 6.

A group of people, including Bill Trinder, Tom Rolt and Owen Prosser had been looking at ways of preserving the Talyllyn and had already been in contact with Sir Haydn and his manager Edward Thomas. Tom called a meeting on October 11 at the Imperial Hotel in Birmingham. About 40 people attended, including Edward Thomas and the meeting formed the Talyllyn Railway Preservation Society and appointed a committee t look into ways of preserving the railway.

At its first meeting on October 23 two future people were co-opted to the Committee, James Boyd and John Wilkins. Mr Wilkins was a Birmingham industrialist, part of the family owning Wilkins and Mitchell, manufacturers of power presses and other industrial equipment and also Servis washing machines. He was also one of the owners of the Fairbourne Railway which had been bought and restored after the war. As probably the only person on the committee with experience of running a small tourist railway he was asked to go and look at the TR and report back.

A special train was arranged. The date and formation are not recorded, nor are details of who went. It probably ran in November 1950. It was probably the same formation at the last passenger train, engine, one carriage and the van. Certainly John Wilkins was on the train and probably someone from the Fairbourne and some committee members. Interesting some of the committee had never seen the railway. The train was driven by Dai Jones and Edward Thomas was probably guard. The train ran to Abergynolwyn but on the return journey Dolgoch derailed seriously somewhere east of Brynglas. The party had to walk back.

Edward Thomas got the assistance of the military from Morfa Camp in Tywyn to get the train back. John Wilkins reported to the committee on December 11. “The track is in very poor condition, sleepers are rotten and about 50% of the rails unusable. Talyllyn is a complete write off and Dolgoch will need inspection before it can again have its boiler insured. This is not in good order, being 81 years old”

At that time it was thought Dolgoch’s boiler was the original of 1866. Later research has revealed it dated from 1891. The cost of track repair was estimated as £10000 (£350000 at today’s value).  The committee can have been in little doubt as to what they were trying to take on. It is thought no other trains ran under Sir Henry Haydn Jones ownership. The story had a happy ending as Lady Haydn reached an agreement with the TRPS in February 1951 to hand over the railway and the first train of the preservation era would run on May 14, 1951.

A special train to re-create the 70th anniversary of the very last train pre-society train was run on November 9. Due to the various COVID-19 restrictions it was a very quiet affair. Carriage No.3 was used as it has two separated compartments. The train was driven by David Jones, son of Dai who drove the 1950 train with his son, Tom, as fireman. The Jones family have worked on the TR for some 5 generations, Dai’s father and father working on both the railway and quarry. Needless to say the serious derailment was not re-enacted.

By the late 1940s the Talyllyn Railway was in very dilapidated condition. Only Dolgoch was workable Dating from 1866 it was believed at this time to still be carrying its original boiler.

Most of the track dated from construction in 1865 and was in very poor condition.

The Talyllyn was not included in the Nationalisation of the railways in 1948. It was very unusual in being a public railway, offering a timetabled service, owned by an individual, Sir Henry Haydn Jones. The only other such line was the Romney, Hythe and Dymchurch Railway owned by Captain Howey.

Sir Haydn had bought the railway and the quarry at Bryn Eglwys in 1911. The quarry closed in 1946. Sir Haydn, now in his eighties, said he would keep the railway running as long as he lived. When died on July 2, 1950 is seemed the railway would close. Sir Haydn’s widow kept the railway running for the rest of the summer season and the last passenger train ran on October 6, 1950, with Dolgoch, the first-class coach and the brake van.

The Talyllyn had attracted the attention of railway enthusiasts. Two articles about the appeared in 1949 in the Picture Post and the Birmingham Post., which resulted in a letter from Tom Rolt to the latter explaining he represented a small group of people who had been looking at ways the railway could be saved and asking people who were interested in saving the railway to contact him. Tom and Bill Trinder had already had contact with Sir Haydn.

The death of Sir Haydn brought matters to a head. Contact was made with Lady Haydn Jones solicitor and Lady Haydn was keen to keep the railway going. Tom called a meeting at the Imperial Hotel in Birmingham on October 11, 1950. The attendance was less than 40 people. The meeting was attended by Mr Edward Thomas who had been the manager of the railway for many years. At the end of the meeting a committee was formed and the TRPS was born. At its first meeting on October 23, several more people were co-opted, including John Wilkins

John Wilkins was one of the family who owned Wilkins and Mitchell, a Midlands manufacturer of power presses, machine tools and other industrial equipment. They also produced Servis washing machines a mass-produced domestic appliance. Adverts for Servis appeared on the rear of a number of Talyllyn News. In 1946 he, together with his brother and Tommy Hunt, another Midlands industrialist, who later produced castings etc for the TR and re-gauged No.6, bought the semi derelict Fairbourne Railway just up the coast from Towyn.

As probably the only person on the committee with experience of running a little railway John either volunteered or was asked to examine the TR and report on its state. The TR was contacted and a train arranged. Who was on the train is not recorded. Probably John was there and possibly someone from the Fairbourne. It is also possible some committee members who may not have seen the railway also went (Pat Garland, now the treasurer of the TRPS had not seen the railway at this time).

The date is not recorded but was probably sometime in November. No details of the train have survived, but as the last passenger train was Dolgoch, one carriage and the van, probably the same combination was used. Probably the train would have started from Pendre and went to Abergynolwyn. On the return journey the loco derailed seriously somewhere around 6 bends. The inspection party had to walk back to Towyn.

John’s report to the Committee meeting on 11th December 1950 was not encouraging:-

“The track is in very poor condition; sleepers are rotten and about 50% of the rails unusable. The minimum requirement for safe running would be a new sleeper under each joint and the replacement of the completely u/s rails. The 10 tons of Corris rail would only go a small way to help this. (This had been acquired in 1949 and moved to site, but not been laid.) The cost of putting the track in good order would be about £10000. The locomotive Talyllyn (The locos were not numbered till 1951) is a complete write off and Dolgoch will need inspection before it can again have its boiler insured- this is not in good order being 81 years old”

John became one of the first TRPS directors of the Company and was very helpful, providing both money and manpower from the Fairbourne to help the TRPS in its early days.

It was clear that the TRPS had no money to spend on purchase. Everything would have to be spent on renewals. Lady Haydn was initially not keen on handing over the railway to the Society, but was later won over, probably to a large extent by Edward Thomas. On February 8, an agreement was signed by Lady Haydn and TRPS and the TRPS took control of the railway. Their two priorities were repairing the track and having a work able locomotive. This is really the story for next year, but it is worth mentioning at on March 17, 1951 the two Corris engines arrived, by train, at Wharf , the first new, at least to the TR, engines in 85 years.

The concept of a society providing volunteer labour and raising money was born and has been followed by most railway preservation schemes since.