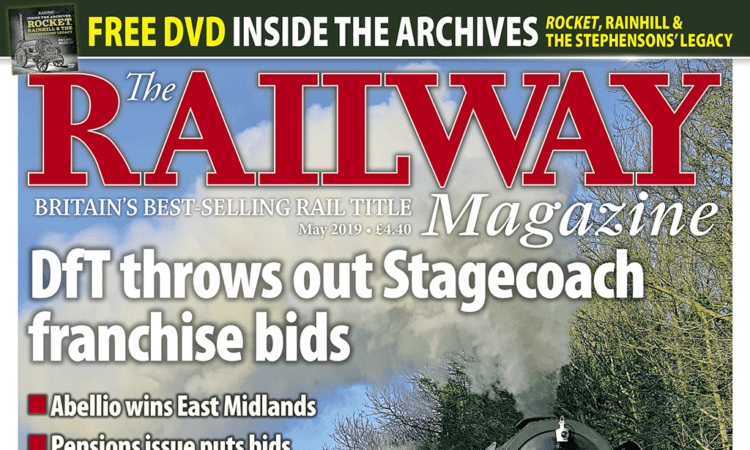 The May issue of The Railway Magazine contains an exclusive feature which looks back exactly 50 years to when campaigners gained an injunction preventing British Rail closing the line between Stratford-upon-Avon and Tyseley.

Gary Boyd-Hope reviews how reopening the railway to the tourist trap of Broadway 12 months ago has had a positive impact on the Gloucestershire Warwickshire Railway, and Nick Pigott concludes his historical analysis on steam locomotive coaling towers and ash disposal plants.

Nick Pigott concludes his study of the steam-era coaling towers that once stood at more than 100 loco depots across the UK.

The recent closure of Whiteball Tunnel for repairs gives John Heaton a perfect opportunity to compare the performance of GWR HSTs and IETs over less familiar routes. .

Sentry at the Gate

Fraser Pithie recounts the extraordinary story of how the North Warwickshire Line between Tyseley and Stratford-upon-Avon was rescued from ‘closure by stealth’ in the late-1960s.

The Gloucestershire Warwickshire Railway has enjoyed a record-breaking year since its Broadway extension opened in 2018. Gary Boyd-Hope visits to discover what lessons have been learned.

Robert Humm charts the life and career of a notable locomotive engineer, writer and artist.

Franchising is so unpredictable

There’s one aspect of rail Privatisation and franchising we’ve learned to get used to over the past 25 years – its unpredictable nature.

The news Stagecoach Group not only failed in its bid to retain the East Midlands franchise, but was also disqualified from bidding for the Southeastern and lucrative West Coast Partnership franchises, was not only a surprise, it could well deter the company and indeed others from investing in rail. Virgin Group founder Sir Richard Branson has said the Virgin Trains name could disappear by November.

For both companies, which have been a dominant force in rail for more than 20 years, it’s a sad day. Staff of both companies, some of whom I know personally, have been dealt a bitter blow because there is a strong family-type bond among the employees, most of whom go above and beyond the call of duty – as do most rail staff.

Leaving the pensions issue aside, which has been a pivotal aspect of the Department for Transport’s decision, I can recall when National Express held several large rail franchises – ScotRail, Midland Main Line, Central Trains – but relinquished the East Coast franchise in 2009, opened the exit door, and walked away from railways.

Stagecoach too failed to renegotiate its tenure of the East Coast franchise in 2018 when it began losing money because infrastructure improvements on which the bid was made hadn’t been carried out, and so the franchise was terminated.

Yet, with wide agreement that rail franchising in its present form is broken, doesn’t it strike you as rather odd the Department for Transport makes an eight-year franchise award when the Williams Review could change everything?  Why not continue with direct awards for a short period? It begs the question whether Stagecoach is being made an example of and whether they will exit railways.

How can franchising (or concessions, if that is what the industry decides to adopt) encourage fair and proper competition when experienced transport companies are told they must take unnecessary financial risks or else consider themselves non-compliant?

Are other franchisees – most now mainly state-owned European undertakings – really taking on the risk of the bottomless hole in railway pensions simply to remain compliant?

With this latest decision, franchising has become even more problematic and confused. I really hope the Williams Review can find a way out of the mess railways are in and rebuild confidence all round.

I’VE been making comments for some months about the mess in the rolling stock market. Several months on, matters have still not improved, and by Easter no new trains had entered service.

‘Pacers’ should be between a third and halfway through a withdrawal programme, but are still running.

Around 140 HST vehicles sit idle in store while CrossCountry services remain often full and standing, and their service beyond Exeter is abandoned because ‘Voyagers’ and sea water don’t mix.

Redeploying six to eight sets for CrossCountry to work into Devon would go a long way to solving several problems. With the summer coming, the time to cut a deal is now, but I am not holding my breath.

But by far the biggest scandal, one which the national press has not really latched onto, is the number of stored Class 345 Crossrail trains. They say a picture paints a thousand words, and the sidings at Old Oak Common are full to bursting with around 200 new Class 345 Crossrail carriages having no work, and nothing in the near future. Because of the ongoing delays to the Crossrail project itself rolling stock worth around £250m sits idle, day in, day out.

You really could not make it up..

This issue has a free DVD, with all new content, which looks back 190 years to the Rainhill Trials, Rocket, and the impact George and Robert Stephenson were to have on railway development.

I appreciate not all readers will have DVD players, so you can watch it online y using the following link: www.railwaymagazine.co.uk/rainhill2019/

I hope you enjoy it.