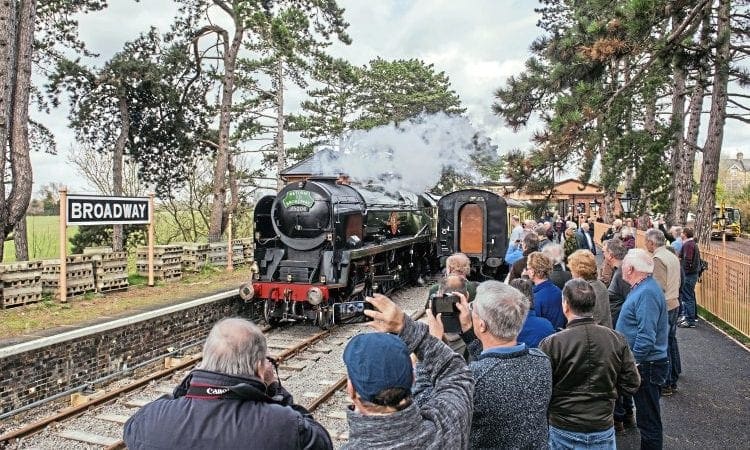 The 12 months since the opening of the Gloucestershire Warwickshire Railway’s extension to Broadway have seen numerous records broken, with the line continuing to reap the benefits of its connection with the picturesque Cotswolds village. Gary Boyd-Hope went along to find out how the railway has risen to the challenge, and what lessons have been learnt in the past year.

ONE didn’t need to be a clairvoyant to predict the Gloucestershire Warwickshire Steam Railway (GWSR) wouldn’t come away empty handed from the Heritage Railway Association’s annual awards ceremony on February 9.

The railway has been riding the crest of a wave since it opened its extension to the rebuilt Broadway station at Easter 2018, and with records being broken left, right and centre it seemed inevitable these achievements would result in an award.

In fact the railway won two!

The opening of the Broadway extension by Lord Faulkner of Worcester on Good Friday (March 30) was one of the biggest news stories carried by the railway press last year.

It marked the culmination of a dream started in the early-1980s when the fledgling GWSR began its first operations at Toddington. Of course, turning that dream into a reality was not a simple one, with the railway having to overcome more than its fair share of adversity, including two major embankment collapses, to create almost 15 miles of heritage railway through the delightful Cotswold countryside.

Preparations had been years in the making.

While track gangs edged the permanent way north-eastwards from Toddington to Laverton, then onwards towards Broadway, a team had skilfully re-created the lost Broadway station in fastidious detail.

This included the construction of two platforms, a new station building in GWR style, the erection of a footbridge (ex-Henley-in-Arden) and the building of a signalbox containing the
46-lever frame formerly of Aller Junction ‘box. Not to mention the aesthetic details that provide those all-important finishing touches.

Stand at Broadway station today and there’s very little indication to suggest this is not an original Great Western station.