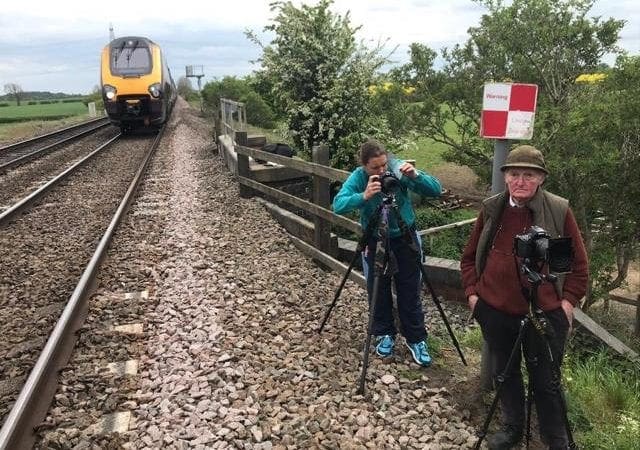 British Transport Police (BTP) is appealing for information following numerous railway trespass incidents on Sunday, May 5 as Flying Scotsman was operating on the national network.

During the National Collection-owned locomotive’s journey across the East Midlands, a number of people illegally accessed the tracks near Burton on Trent and Tamworth attempting to view the historic A3 Pacific, causing significant disruption to rail services.

A total of 56 trains saw services being disrupted, with nearly 1,000 minutes of delays being so far calculated. In one instance, two enthusiasts stood incredibly to the tracks, with a  line speed of 125mph.

Chief Inspector Gareth Davies from British Transport Police, said: “It is extremely disappointing that a small minority of rail enthusiasts put their lives in grave danger in an attempt to take photos of the Flying Scotsman. Quite frankly, they should know better and we are today sending a strong message that this will not be tolerated.

“We’re making a number of urgent enquiries to identify those who trespassed on the tracks, I would ask anyone with information to get in touch.

“The railway is an extremely hazardous environment, trespassing could result in serious injury or even death. In order to prevent further incidents, we’re stepping up our patrols when the Flying Scotsman is out on the rail network – those caught trespassing or obstructing trains can expect to be prosecuted.”

As part of enquiries into incidents on Sunday, May 5, officers are releasing a photo of two people they wish to speak with in connection to a trespass incident near Elford. Anyone who recognises this man and woman is asked to contact BTP by sending a text to 61016 or by calling 0800 40 50 40.

On May 9, Flying Scotsman was travelling between York and Edinburgh along the East Coast Mainline. BTP said it had put resources in place out across the network to deter trespass offences – with officers working alongside colleagues from Network Rail and Train Operating Companies.

What to do if you see trespassers trackside

If anyone witnesses a trespass incident, they are advised to call the police immediately on 999.

BTP is also reminding those planning to see the famous steam engine about the dangers of edging too close to the tracks and is issuing the following advice: