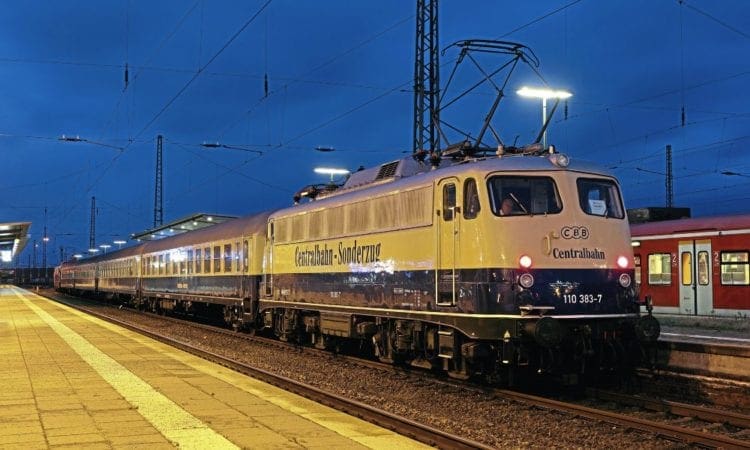 Veteran electric locos have made a comeback on several routes in Germany, replacing modern EMUs, which are out of service because of accident damage or maintenance.

National Express had been using a push-pull set of older coaches, normally powered by loco 110 469 (although other loco types have appeared occasionally) on the Cologne to Wuppertal ‘RB48’ route throughout 2018 following accident damage in late-2017 to some of its fleet of ‘Talent 2’ EMUs; the replacement train (or Ersatz Zug in German) normally only operates on weekdays.

The train hired by National Express is from leasing firm TRI – which also now has a contract with the regional transport authority (VRR) to provide additional trains in the entire Ruhr area both for major sporting events and also to provide relief trains whenever the transport authority decides they are needed, so this train may see extensive use in 2019.

In November, Keolis, which operates contracted services using EMUs under the ‘Eurobahn’ brand name, started using a set of coaches from charter operator Centralbahn on the Nienburg (Weser) to Minden route, used in top-and-tail mode with a Class 110 from the Centralbahn fleet on each end (occasionally an ex-Austrian Railways Class 1142 was used instead).

This replacement train was introduced because of a shortage of EMUs and is likely to run into January, possibly longer.

From December 9, Eurobahn started a second loco-hauled substitute train, this time on the RE3 route between Düsseldorf and Hamm. It uses a more modern Bombardier ‘Traxx’ Class 145 freight loco hired from leasing firm SRI.