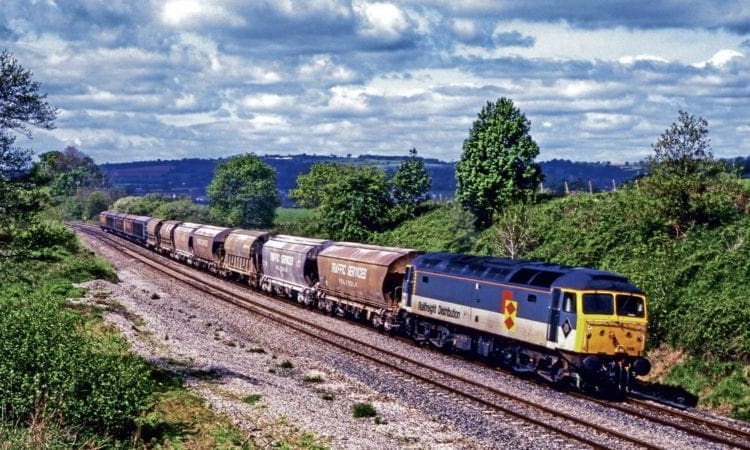 Introduced in the early 1980s, the strikingly-liveried hoppers were a distinctive part of the Speedlink scene throughout the decade, later seeing use on export workings through the Channel Tunnel.

For many years, the long-distance china clay traffic from the West Country to the Potteries was transported in British Rail vacuum-braked five-plank open wagons. These had been modified with roller bearings during the 1970s to improve reliability but they could only carry 13 tons and needed to be sheeted to protect the highly sensitive load from the elements.

Known by both rail staff and enthusiasts alike as ‘Clay Tigers’, the 35 new wagons were built by Fauvet Girel in France and could carry 57.5 tonnes. Their tare of only 22.5 tonnes resulted in a gross laden weight of just 80 tonnes, enabling them to run on almost all of the lightly laid branch lines in Cornwall and Devon. Numbered TRL11600-34 and coded PBA on TOPS, they measured 17,200mm over headstocks and ran on Sambre-et-Meuse Y25CS2 bogies centred at 13,400mm, allowing them to negotiate a 71 metre curve.

For easy loading at the clay drying plants, which employed front loading shovels, the wagons had a large 1400mm by 11,400mm roof aperture, this being covered by a one-piece bi-directional waterproof roof that was operated by a control wheel from one end of the vehicle.

The steep-sided hoppers discharged through four 1600mm long bottom-doors that were hinged parallel to the track while, in addition, the hoppers were fitted with a dead-fall system with snap-over arch-breaker arms similar to those found on merry-go-round coal hoppers. This enabled smooth unloading not only of lump clay (dried but unmilled china clay) but also the stickier ball clay produced at ECC’s works in Devon and Dorset.

The ‘Clay Tigers’ entered service for ECC in August 1982, taking over the ‘Clayliner’ working from Cornwall and running as a 10 or 11-wagon block train to a new rail-served terminal that ECC had opened at Cliffe Vale, situated half a mile to the north of Stoke-on-Trent station.

However, with the improved capacity and efficiency that the new wagons brought, it soon became evident there was some slack within the fleet so by the spring of 1983, the ‘Clay Tigers’ had also begun to appear in Speedlink services running between Cornwall and Scotland. Their primary Scottish destination was the PD Stirling distribution depot at Mossend but by the late 1980s, they were also used to supply the Tullis Russell paper mill at Markinch, Fife.

China clay loading points for these wagons in the West Country included the ECC dries at Burngullow, Goonbarrow Junction, Kernick, Marsh Mills, Parkandillack, Pontsmill and Treviscoe. In addition, they occasionally carried china clay from the Goonvean & Rostowrack Clay Company sidings at both Bugle and Drinnick Mill, while ball clay was conveyed from the ECC works at Furzebrook, near Wareham, and Heathfield, north of Newton Abbot.

Early in 1987, one of the ‘Clay Tigers’ was borrowed by BR for trials, these involving loading with cement clinker at Blue Circle’s Plymstock Works and with desulphogypsum at the CEGB’s West Burton Power Station. However, neither proved to be a success and after cleaning, the wagon was soon back in china clay traffic.

Although their workings to Scotland ceased with the demise of the Speedlink wagonload network in July 1991, the ‘Clay Tigers’ continued to supply Cliffe Vale, initially working as the 6M72/21.25 Saturdays-excepted departure from St Blazey. This service was reclassified as part of Railfreight Distribution’s Contract Service network, while Tiger Rail’s bankruptcy in 1992 had little effect other than to see ownership of most of the fleet pass to Tiphook Rail. This did bring a change of livery in the early 1990s though with the white giving way to all-over blue, while a reorganisation of TOPS wagon codes at the start of the decade had seen the wagons recoded from PBA to JAA.

In 1994, 24 of the ‘Clay Tigers’ were allocated to ferry diagram E803 after being fitted with additional chaining-down lugs and renumbered in the UIC/RIV series as Nos. 33 70 9382 059-082 with the new TOPS code of JIA. This allowed them to work through to the continent, serving ECC customers in Switzerland and Italy via the Dover-Dunkerque train ferry and then the Channel Tunnel.

In the event, such use was short-lived and by 2001, many had reverted to their previous numbers in the private owner series. Throughout this period, the ‘Clay Tigers’ continued to serve Cliffe Vale but all were eventually withdrawn in 2004 when this working was fully taken over by the new fleet of Imerys-branded 90 tonne GLW covered hoppers leased from Nacco.