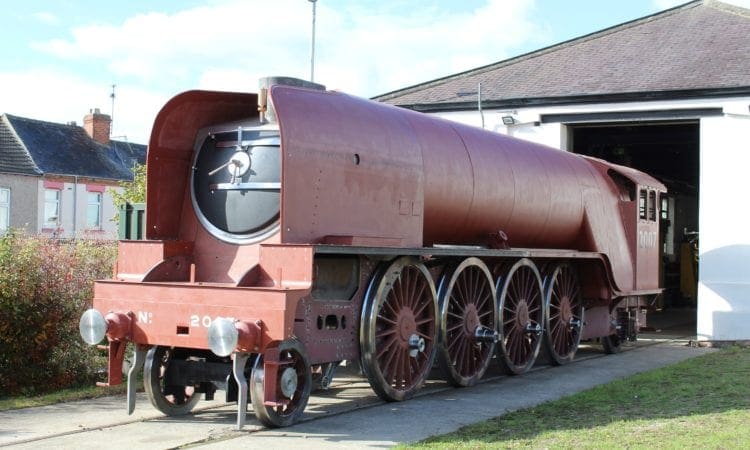 As the project to build new Gresley class P2 steam locomotive No. 2007 Prince of Wales prepares for the delivery of the heavy motion, only five years after its launch, a new batch of components has been released for sponsorship in time for Father’s Day on June 16, 2019.

The class P2 2-8-2 ‘Mikado’ locomotives were the most powerful passenger steam locomotives to operate in the UK, designed by Sir Nigel Gresley to haul 600-ton trains on the arduous Edinburgh to Aberdeen route.

Sadly, the design was never fully developed, and they were rebuilt in 1943/44 and scrapped by 1961.  The A1 Steam Locomotive Trust (registered charity and builders of famous new 100mph steam locomotive No. 60163 Tornado) is building the seventh member of this class over seven years at an estimated cost of £5m. The project will demonstrate how the design can be fully realised through use of modern computer design techniques, enabling the new locomotive to deliver its full potential hauling passenger trains at high speed across today’s national network.

Public interest in seeing a new Gresley class P2 become a reality sooner rather than later is high and well over 900 people have already signed up to the ‘P2 for the price of a pint of beer per week’ (£10 per month or more) Covenant scheme since its launch three years ago.

In addition, funds have been raised through The Founders Club (over 360 people donated £1,000 each – target 100 people), The Boiler Club (over 175 people have pledged £2,000 each – target of 300 people), The Motion Club (over 135 people have pledged £1,000 each – target 175 people), The Mikado Club and The Cylinder Club (both now fully subscribed raising over £375,000 combined), The Tender Club (newly launched with over 25 people pledging £1,500 – target 250 people) and Dedicated Donations (over £340,000 from existing supporters sponsoring a variety of components). This means that the project has already received pledges of over £3.3m (including Gift Aid) of the £5m needed.

People who subscribe to the scheme will have their names (or the name of the person the gift is for) inscribed on the official roll of honour at Darlington Locomotive Works listing the components sponsored, receive a certificate recording the sponsorship and copy of the drawing of the component.

“We are delighted with the support the project to build Britain’s most powerful steam locomotive has received since its launch five years ago, with over £2m spent, £2.6m donated and £3.3m of the required £5m pledged to-date. We are confident that we will have the heavy motion delivered by the end of 2019 and remain on-track for completion around the end of 2021. However, to maintain this progress we need to raise £700,000 per year. We are therefore taking the opportunity of Father’s Day to give the Dedicated Donations scheme a boost.

“This initiative is a unique opportunity for supporters to have their father or grandfather’s name associated with a component of No. 2007 and the funds raised will help to ensure that Prince of Wales will be completed on schedule. Just as with the similar scheme that helped to fund the construction of now world-famous Tornado, supporters who subscribe to the scheme will have the satisfaction of pointing to the part of the locomotive they paid for when No. 2007 enters service. 2018 will see further major announcements as the construction of Prince of Wales gathers pace.”

Please contact dedicated.donations@p2steam.com for further information. New components available for sponsorship will become available as construction progresses. Please note that monthly payment options are one of the benefits made available to existing regular supporters only.