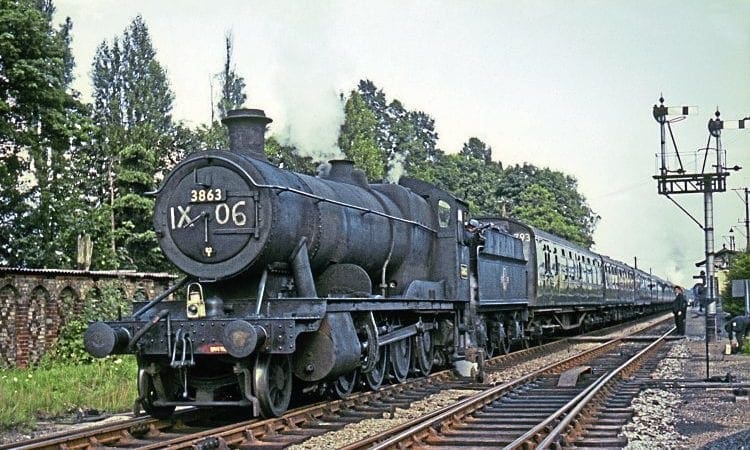 For this month’s Practice & Performance , Keith Farr takes a nostalgic look at some notable steam rail tours from the 1960s

One fine June evening in 1967, a friend and I were enjoying dinner in the restaurant car of the 17.05 Euston-Carlisle. During the soup course we were discussing our plans for recording steam over Shap when the brakes came on and, like Edward Thomas’s express train at Adlestrop, we came to a stand unwontedly, but somewhere in Cheshire.

Apparently, our Brush Type 4 diesel did not want to go any further; so, after a commendably short interval, we were rescued by an ‘8F’ 2-8-0, which trundled on to Warrington to be replaced there by another Class 47.

What has this to do with railtours? Twice have I experienced main line haulage behind an ‘8F’, on the occasion mentioned and on the ‘Eight Counties Railtour’ in March, 1966. Organised by the Railway Correspondence & Travel Society (RCTS) and starting from Northampton, the ‘special’ was powered by Stanier ‘8F’ No. 48467 from Leicester to Nottingham, where a ‘B1’ took over for a ‘track-basher’s delight’ via the Notts/Yorkshire coalfield to Wath Exchange sidings. Gresley’s prototype DC electric loco, No. 26000 Tommy, then crossed the Pennines via Woodhead to Godley Junction, where steam haulage was resumed in the form of a ‘Jubilee’, No. 45596 Bahamas, continuing via Northwich to Crewe.

The return to Northampton was behind another Bo-Bo electric, this time AC and more dashing in style and behaviour than Tommy.

How did the ‘8F’ perform? The log in Table 1, obtained from the Railway Performance Society’s electronic archive and recorded by RPS member Bruce Nathan, demonstrates  the ability of a Stanier 2-8-0, designed to haul slow, heavy freight trains, to attain express passenger speeds.

Rapid exhaust beats merged into a continuous roar as No. 48467 accelerated away from Leicester, nudging no less than 70mph on a level and slightly downhill road before slowing to bear right for Nottingham. And, after negotiating the Trent junctions, the ‘8F’ was quickly up to 68mph at Beeston. Despite a signal stop, the ‘Eight Counties Railtour’ came to a stand at Nottingham (Midland) within the scheduled time.

Read more and view more images in the June 2019 issue of The Railway Magazine – on sale now!