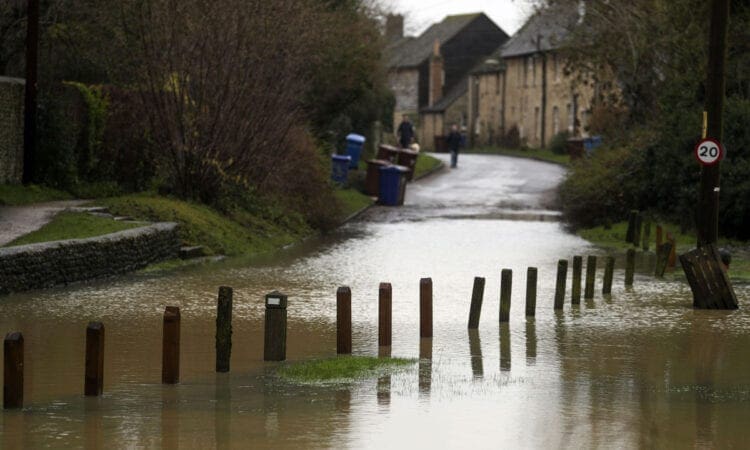 The Rail, Maritime and Transport union (RMT) has warned of the severe consequences that adverse weather could have on rail services.

The union has raised concerns with Network Rail about insufficient resilience to poor conditions which could endanger passengers and rail workers.

The warning comes a week after the collapse of part of an Aberdeenshire rail bridge due to appalling weather, close to the site Stonehaven tragedy.

RMT general secretary Mick Cash said: “Whilst rail workers have been battling in appalling conditions to keep rail services moving, it is shocking that even after the Stonehaven tragedy Network Rail have not been able to identify with us what areas of the railway are at risk from adverse weather conditions and what steps are being taken to reduce that risk.

“Poor railway resilience and poor weather conditions are a toxic combination which could have terrifying consequences for passengers and workers. We are also deeply concerned that the necessary inspection and works regimes needed are being compromised by budget and resource constraints.

“Network Rail need to provide answers and action before we have another tragedy.”

The union has called for clarity on whether a UK-wide rail register has been fully developed which identifies what areas of the railway are at risk.

RMT said it is seeking answers as to whether enhanced inspection and maintenance regimes are in place to protect resilience. It also wants to know if safety and efficiency are being compromised by budgetary and resource constraints and the use of sub-contractors.

A Network Rail spokesperson said: “We are very much aware of the challenges posed to our railway by climate change and an increase in extreme weather events.

“We are already making record investment to help us manage our cuttings, embankments, structures and drainage systems, and in the wake of the Stonehaven tragedy we took immediate action – for example inspecting higher-risk trackside slopes immediately and discussing with meteorologists how we can strengthen real-time information when there is extreme weather.

“We also asked experts Lord Robert Mair and Dame Julia Slingo to lead independent task forces to identify how we can better manage our huge earthworks portfolio and respond to severe weather events.

“Those reviews are nearing completion and we will consider all recommendations carefully. Our number one priority remains operating a safe and reliable railway while keeping our passengers and staff safe.”

Communities are bracing for flooding and major incidents have already been declared in Greater Manchester and South Yorkshire amid amber and yellow weather warnings for the storm.

More than 120mm of rain has already fallen in parts of the country, with 123.4mm at Honister Pass in Cumbria in the 24 hours up to 6am on Wednesday.

Rail services have been disrupted on the Northern network after tracks flooded.

There are suspensions on services from Carlisle to Skipton or Maryport, all destinations from Rotherham Central, and between Manchester and Newton le Willows.

Trains are also subject to disruption between Leeds and Manchester, Salford Crescent to Preston and another of other routes.

A spokesman for Northern said: “The difficult conditions are being experienced across a large part of our network and customers planning to travel today should be aware that any journeys could be affected and they should allow extra time for travel.”

People were also preparing for rising floodwaters in West Yorkshire on Wednesday morning, with towns in the Calder Valley laying out sandbags and flood wardens monitoring water levels.

As the week continues and Storm Christoph makes its way east, the risks of snow increase, Mr Madge said.

“When Christoph starts to move into the North Sea we will start to see more northerly influence coming in, we’re going to have a feed of colder air which will bring in wintry showers,” he said.

“Over higher ground to begin with but increasingly those events will be to lower levels as well and that could lead to some accumulations in Scotland, northern England and parts of Northern Ireland.”

51 warnings have been issued by the Environment Agency across England, with 179 less severe flood alerts, mainly across the Midlands and north of the country.

Speaking during Prime Minister’s Questions on Wednesday, Boris Johnson told MPs: “Our sympathies also go out to those affected by the latest floods.

“I want to thank the Environment Agency and our emergency services for the work they’re doing to support those communities, and I’ll be chairing a Cobra meeting later on to co-ordinate the national response.”

Almost the whole of England, Wales, and Northern Ireland are subject to yellow weather warnings for rain until midday on Thursday, with a more serious amber warning stretching from the East Midlands to the Lake District.

The amber alert warns of the risk of flooding and deep floodwaters which could pose a risk to life, and there are further yellow warnings for snow and ice in Scotland.

Met Office forecaster Grahame Madge described Christoph as “quite a slow-moving system” which is bringing “a variety of weather” to the UK.

The meteorologist said: “While rain remains the main hazard in the south, further north we’ve got snow and ice remaining a risk.

“The system will work its way through, we are expecting significant totals of rainfall and when you combine that with snowmelt it can lead to localised flooding across the affected regions.”

The force said people should leave flooded homes if instructed, despite the stay-at-home messaging of the pandemic.

Assistant Chief Constable Nick Bailey said: “Coronavirus remains a threat to everyone’s health and people should not leave their homes unless it is absolutely essential, but where there is a risk of flooding, that is clearly essential and we’re working with our partners to ensure that people can do this as safely as possible.”